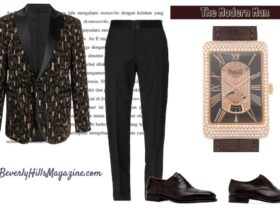 Before the Duchess of Sussex secured her role in Suits in 2011, Meghan Markle was married to Trevor Engelson. The couple rented this charming Colonial-style home in the Hancock Park neighborhood, just a stone’s throw from downtown Hollywood.  Though it was necessary for her to live nine months of the year in Toronto for filming, this Los Angeles home is where she returned on break until her divorce in 2013. It was recently put on the celebrity real estate market staged in her signature style. The asking price is $1.8 million. (Image credit: The Bienstock Group)

Filled with sunlight bouncing off of white walls and a bright minimalist decor, the 1924 Colonial measures 2,262-square-feet with four bedrooms and three baths. An open floor plan joins the family room, living room with fireplace and dining area. Natural light abounds in the eat-in kitchen, highlighting the white cabinets and marble countertops.  The dining room opens onto a patio for entertaining and there is a two-car garage with additional parking.

From Self-Made Woman to Duchess

Although romantics love to believe that Meghan Markle’s marriage to Prince Harry was a real life Cinderella story, she was financially successful on her own. She starred  in Suits for six years and earned an estimated $450,000 per show. In addition, she had two popular clothing lines that sold out quickly. Moreover, her fashion-lifestyle blog pulled in about $80,000 annually. By the time Markle became engaged to Prince Harry, her estimated wealth was already hovering at $5 million.

Meghan Markle married Prince Harry in 2018, with whom she now has a son, Archie. Rumor has it the growing Sussex family may be looking for a second home in California where the Duchess’s mother still lives. Surely the house would not suit them as Meghan Markle’s times, fortunes and security needs have changed. But for her followers who themselves have big dreams, it is the perfect house. Now for sale at $1.8 million, the listing agent is Sheri Bienstock of The Bienstock Group, Los Angeles.