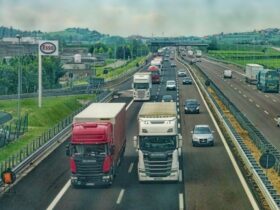 Why You Should Drive Carefully Around Trucks

Lehmann Aviation, the manufacturer of professional micro civil UAVs, has enlarged its line of fully automatic drones having launched LA200 and LA300 (after the LA100 released in December 2012). The new drones are designed for taking professional still aerial images (up to 41Mp with the LA300) and video with the just released Nokia Lumia 1020 and GoPro camera. Several other available Lehmann Aviation products take aerial motion footage with this same innovative technology.

LA200 and LA300, fully automatic drones requiring no piloting skills or training, set new standards in personal aerial shooting. Operations have never been easier: just program the flight path on any Windows8 tablet, transmit the data to the drone via WI-FI and launch it by hand. After a flight of up to 30 minutes (with the LA300), the aerial robots will automatically land in a chosen place.

It has become extremely easy, as never before, to conduct the whole flight. For flight preparation and mission control the user just has to «draw» on a touchscreen tablet the area of interest, enter waypoints and Lehmann’s Operation Center will automatically generate missions and program the drone. The flight data is then to be transmitted to the drone via WI-FI. After mounting GoPro Hero, Hero2 or Hero3 (for the LA200) or Nokia Lumia 1020 (for the LA300) on the wing and launching the drone by hand, the user just has to wait until it automatically flies over the chosen waypoints and lands.

Both LA200 and LA300 are highly user-friendly, efficient and rugged unmanned aerial systems. They fly at speeds of 20-80 km/h and are done to be flown in harsh environments, between -25 °C up to +60 °C (-13 °F up to 140 °F), with winds up to 35 km/h (20kt). Their weight is 950 grams (including any GoPro or Nokia Lumia 1020), whilst the wingspan is 92 cm and the length is 45 cm. Both drones are launched by hand and land in just few meters. The flight range of the LA200 and the LA300 is 3 km and 15 km, respectively. Both systems are initially designed for professional aerial shooting: the LA200 – for the needs of TV channels, documentaries and corporate communications, the LA300 – for mapping and surveying (DEM, orthomosaic).

Deliveries start at the end of September 2013.

All Lehmann Aviation drones come with 1 year warranty and can be regularly upgraded to newer versions.

For more than 10 years Lehmann Aviation develops and manufactures lightweight and high-performance UAS (unmanned aerial systems) technology for civil applications. The company’s UAS are designed to meet the needs of commercial and government sector. The company is headquartered in Blois Airport, France. For more information visit us at www.lehmannaviation.com.