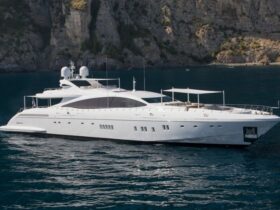 As its third U.S. location, the new opening marks the group’s strategic expansion in the North American market after opening galleries in the Miami Design District and Aspen this past March  —overall aligning with its global positioning in 12 international cities across Europe, Asia, the Middle East and North America; including: Paris, London, Geneva, Monaco, Singapore, Hong Kong, Seoul, Aspen, Beirut and Dubai.

“In a world where the only constant is change, Opera Gallery is continuously exploring new centers of interest, taking the pulse of new ideas and trends as they emerge on the international scene,” says Opera Gallery Group Founder and Chairman Gilles Dyan.

Simultaneous to the Grand Opening, the gallery will also exhibit at the coveted Spring Masters New York show, running May 6-9, at the Park Avenue Armory. Following this, Opera Gallery presents a site-specific installation at TimeCrafters, America’s premier luxury watch show, May 13-15.

Opera Gallery New York is located at 791 Madison Avenue, New York, NY, 10065, +1 (646) 707-3299, at the corner of 67th and Madison Avenue. The Gallery is open Monday through Friday, from 10 a.m. to 7 p.m., and Sunday, 11 a.m. to 6 p.m. The prominent location offers three expansive levels – approximately 4,000 square feet – of gallery and exhibition space, and is centrally located nearby to Central Park, luxury boutiques, a helm of world-class museums and the Park Avenue Armory.

Founded by Gilles Dyan in Paris in 1994, Opera Gallery is one of the leading dealers in modern and contemporary American, European and Asian art with an exclusive list of museum and private clients worldwide. With galleries in 12 major international destinations including Paris, London, Geneva, Monaco, New York, Miami, Singapore, Hong Kong, Seoul, Beirut and Dubai, Opera Gallery continues to set the industry mark in showcasing artworks of exceptional quality supported by two decades of client excellence and integrity in the field. www.operagallery.com