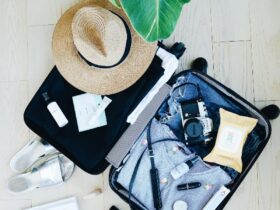 Smart Packing Tips That Will Make You A Better Traveler

Conventional wisdom often dictates making lemonade out of the lemons that life hands you. For some, however, the bigger calling is to provide the means for making that happen for others. Such can be said about Grant Lawson, Lead Crowdfunding Strategist at InventureX.

In a nutshell, InventureX is a firm that specializes in helping entrepreneurs put crowdfunding campaigns in motion. Leveraging a wealth of experience in marketing, Grant spearheads the process by evaluating business ideas, developing a fundraising strategy, and helping entrepreneurs navigate the startup process.

Wouldn’t it be great to learn a thing or two from such a seasoned mind? Take a look at some of the insights he shared with us in a recent interview.

Beverly Hills Magazine: What initially attracted you to the world of crowdfunding?

Grant Lawson: I think it’s the atmosphere that surrounds businesses that are still in their infancy. It is worth pointing out that I also work with seasoned entrepreneurs as well, basically anyone that needs funds to get their venture up and running. In either case, crowdfunding allows me to  interact with the mind(s) behind some pretty interesting concepts, products, and business models.

InventureX was informed by the need to help out underdogs. No offense, but our client base is largely comprised of people who’ve been turned away by other potential financiers. Few experiences in life are as fulfilling as helping such individuals believe in themselves once again.

Beverly Hills Magazine: What is one personality trait that you think has made you successful in the crowdfunding industry?

Grant Lawson: I guess I should start by saying that success in any niche depends not on one but a combination of factors. Looking back at my early years, I greatly appreciate the work ethic that I had instilled in me right from childhood. It’s this that helped me acclimatize to the demands of the industry.

Crowdfunding is unlike most other business fields, you’re constantly launching campaigns to get ventures off the ground, a process that requires hefty commitments in effort.

My strong belief in teamwork also played a hand in the process. On one hand, it gave me the ability to cultivate relationships with clients before laying the groundwork for their campaign. I also make sure to communicate any ideas that come up during my brainstorming sessions.

Beverly Hills Magazine: What is the hardest thing about launching a crowdfunding campaign in 2019?

Grant Lawson: This might sound strange coming from an industry insider, but I feel that crowdfunding could become a victim of its own success. Stories of entrepreneurs who’ve hit their funding targets have sparked lots of interest from the public. This of course means that the number of people looking to launch crowdfunds in the near future keeps growing by the day.

That might not sound like much of a problem, especially considering the model’s vast financing potential. At this point, however, it’s worth clarifying that crowdfunding is basically a marketing initiative, success depends on the ability to attract exposure and build trust with potential investors. This’ll obviously require a lot more input and effort as campaigns keep growing in number.

Beverly Hills Magazine: Share one fun fact that no one knows about you.

Grant Lawson:Hmm… Let’s see… Okay, most people probably don’t know that I had brief stints in retail and the restaurant industry. I’m glad that the experiences I acquired here come in handy almost every other day.

Connect with Grant Lawson and the InventureX team.

It is fair to say that you are looking forward to learning more about InventureX and crowdfunding in general, aren’t you?

Just check out their blog at InventureX.Wordpress.com. The firm also maintains an active presence across the major social platforms.