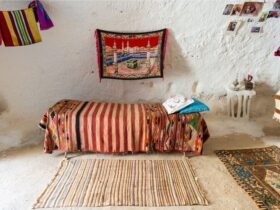 How to Clean and Maintain Jute Rugs

Vin Diesel has been in Hollywood for a long time and is famous for his role in Fast and Furious, but how did he become so great and fast? In our Hollywood Spotlight, we will find out how he became so successful in the movie industry.

Vin Diesel started his career in the 90s but struggled to land roles until he wrote, directed, produced, and starred in the short film Multi-Facial and got noticed by Steven Spielberg, who was developing Saving Private Ryan.

Steven rewrote the movie elements to allow Diesel to appear in a supporting role. This was his first real experience with acting after small plays and an uncredited role in the drama film Awakenings. The movie Saving Private Ryan helped introduce him to Hollywood, but he kept working as a bouncer and a telemarketer selling lightbulbs to support himself.

His first feature-length movie was Strays. He played the role of a gang leader whose love for a woman inspires him to try and change his ways. The film, also produced by Diesel, was selected for competition at the 1997 Sundance Festival, leading to an MTV deal to turn it into a series. In 1999, he voiced the title character in the Iron Giant movie, and things started to look up for him.

In 2000, Vin Diesel played a supporting role in the thriller Boiler Room, where he appeared beside Giovanni Ribisi and Ben Affleck. This movie paved the way for his breakout leading role in the movie Pitch Black as Riddick.

In 2006, after playing an unusual light-hearted role in The Pacifier’s comedy, he chose a dramatic role playing a real-life Mobster in the movie Find Me Guilty. Unfortunately, this film did poorly at the box office, grossing only $2 million against a budget of $13 million. This led to Diesel reprising his role in The Fast and Furious: Tokyo Drift.

In 2007, Diesel thought he might produce and star in a movie based on a video game called Hitman as Agent 47 but eventually pulled back and served as an executive producer instead. After the movie and another Box office failure, he returned to the Fast and Furious franchise with some of the original cast. Vin Diesel remained in the franchise from installments five to nine before reprising his role in the movie Riddick from the Chronicles of Riddick series.

In 2020, he portrayed the Valiant Comics character Bloodshot in the movie, also called Bloodshot. He joined the cast of the Avatar: The Way of Water and announced his venture into music after releasing the song, Feel Like I Do. He said that since he could not be on a movie set due to the pandemic, he is using music to share his feelings with others.

Vin Diesel will play great roles in other projects like Guardians of the Galaxy Vol.3, Fast X, and Avatar 3. We can follow what he shares on social media to stay in the loop.