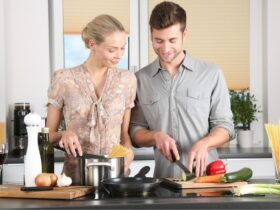 Tips for Newlyweds Moving in Together

The Ford GT was Ford’s attempt at recreating the legendary 1966 Ford GT 40 sports car that beat Ferrari in the Le Mans, four times! I think they outdid themselves, there is no denying that. The GT captures all of the sensual lines and pure masculinity of its predecessor. Looking at the car, there is visually little difference; it is absolutely beautiful to look at. However, that’s where the similarities end. These dream cars have been completely redesigned for the 20th century using advanced materials and manufacturing processes. The GT is a little bit broader, longer and stands 3 inches higher than the original, but you wouldn’t be able to tell unless you had both cars sitting side by side.

The reason the GT does not carry the GT40 badge is because the company that bought the licensing rights in the 60’s could not come to an agreement with Ford at time of production. So Ford used the GT designation instead. This dream car was built using many new and unique technologies, some of which are super-plastic formed aluminum body panels which is a radically new way of making car panels. The process goes like this; they heat an aluminum panel to about 500 degrees, then they use high pressure air to form the panel over a one piece dye enabling them to be able to create the complex curved pieces used on the GT. It also saved on tooling costs. Then there are the roll bonded floor panels, and for the center tunnel, they invented a new way of bonding metal called friction stir welding. It also has an incased fuel tank for safety reasons. The fuel tank is actually mounted in the center tunnel.

The luxury GT also boasts totally reworked aerodynamics. It has a front splitter which aides in front end down force, and then there are the side splitters that prevent air sliding under the rocker panels. It has a smooth enclosed belly pan to stop underbody turbulence. Last but not least, a venturi, runs the back of the car, which practically sucks the car to the ground, making it handle like a race car.

It has double wish-boned suspension all the way around. Powering this beast is a 5.4 Liter V-8, that produces 500 horse power and 500 foot-pounds of torque giving the GT neck snapping power; all this while meeting the emissions and durability standards. These numbers are comparable to the fully blue-printed race-prepared 427 (7.0 Liter V-8) found in the Ford GT luxury motors. The GT has an all aluminum block fitted with four –valve cylinder heads which are high flowing to pump more fuel to the cylinders. It also has dual over head cams. Internally, the engine has a forged steel cam shaft to be able to handle all the power and torque this motor machine produces. It has shot-peened H-beam connecting rods and forged aluminum pistons. Not surprising is that 85% of the reciprocating parts are unique to one of the fastest dream cars, the GT. The massive amounts of fuel the engine needs to perform like a supercar are delivered by dual fuel injectors per cylinder. A modified screw-type supercharger blowing thorough a water to air intercooler, handles the job of providing the GT with enough airflow to feed the engines demands.

The interior of the VIP style cars, Ford GT40  is a close reproduction of the original, obviously with all new materials and gauges. The seats also have the ventilation holes like the original and it also has modernized toggle switches for the auxiliary functions (Really cool). The interior is surprisingly roomy for a sports dream car, although storage space is kept to a minimum. Ford has done a wonderful job of recreating the legendary GT40 for the 20th century. It has overwhelming performance stats and is reliable enough to be a daily driver too; the winning combo for today’s dream cars.