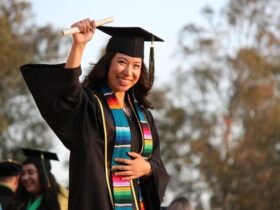 How To Earn An Affordable Degree in California?

It is not easy to lay the groundwork for a new business. It’s possible that starting a franchise is the best option for you. But what if you could enjoy all of the advantages of being an entrepreneur while also having the resources of a larger organization?

Franchising enables larger corporations to expand and thrive while also providing individuals with the option to run their businesses with the assistance and backing of a larger corporation that has a proven formula for success on its side. To be sure, creating a franchise is not without its challenges. However, franchising is a considerably less risky, low cost yet still profitable alternative to starting their own business for many ambitious company owners.

If you are considering starting a franchise, this post looks at some of the benefits this can offer you.

According to the US Department of Commerce and other sources of franchising data, franchise sales account for over one-third of total retail sales in the US.

Over the years, government research has shown that franchise-owned firms have a much higher success rate than non-franchise-owned businesses. In short, franchising is a big business and has a better probability of success than other business possibilities.

Benefits of A Big Company

Competing with more prominent companies is always a massive concern for many small business owners. Opening a franchise allows you to become your boss and run a successful business while relying on the support and backing of a successful franchising company. You will gain better insights into how to operate your franchise and, depending on your particular option, you can also utilize all their materials at your disposal for promotions and advertising, and so on, and be supported by their reputation.

Easier To Get Funding

When you open a franchise, there is, to some degree, the train of thought that you will automatically be successful thanks to the franchising company’s reputation and previous successes. It can be a risky venture when you are looking to lend money to start up a new business. Many lenders will be wary of loaning out large sums due to the unpredictability of the economy right now. But when opening a franchise, you can provide proven results and forecasts, meaning it will be easier to gain the funding you require.

Entrepreneurs who choose to forego the stability of a “real job” in return for the freedom that comes with being their own boss have always emphasized the need for flexibility. Money, or revenue, is always a consideration, but it is surprising how rarely it is the most significant aspect. Many people have left lucrative careers behind because they were unhappy to follow the American Dream and start their own businesses. Not only does status entail titles and positions, but it also includes a sense of belonging and a sense of purpose that comes from being a part of something bigger than oneself.

In the right circumstances, owning a franchise can give you this purpose, provided that you run the business efficiently and manage your time and resources well.