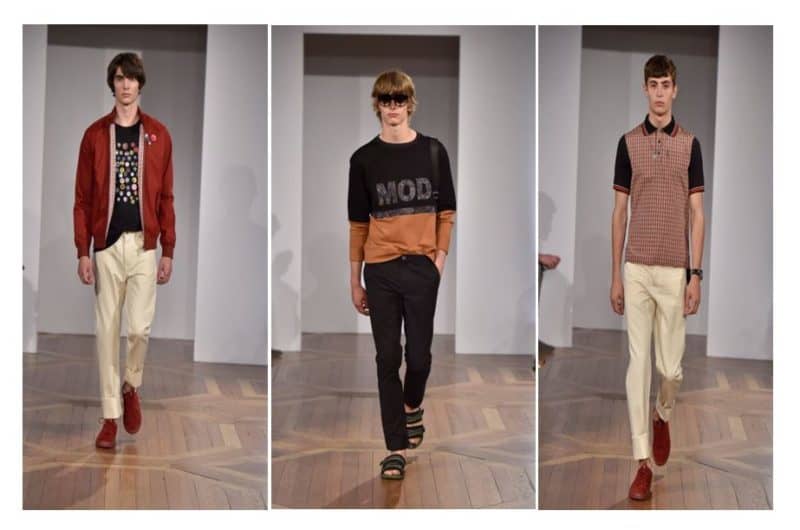 Women are ruling the medium of television. They’re portraying layered, complex characters on sitcoms that range from vintage reboots to progressive family dynamics, and the dark yet humorous things we do to succeed in the workplace.

Actress Lecy Goranson, who steps back into her role as Becky Conner on an ABC Network reboot of the iconic working-class sitcom, Roseanne; reflects on her childhood role. She shares her current perspective on stepping back into her infamous daughter position, and gives us some inside scoop on what it’s like to work with the other beloved cast members.

Beverly Hills Magazine: When you stepped off the Roseanne set for the last time in 1997, did you ever think, in a million years, that you’d be playing Becky Conner all these years later?

Lecy Goranson: No (laughs), I didn’t! Being back has made me realize the time I missed when I was away. It’s an interesting feeling that hit me, that the show continued without me. Everyone was still together after I left. I had a lot of mixed feelings about it. Not regret, but I thought, “Wow. I really love these people and I made a move, but it’s been such a blessing to be reconnected with everyone.”

Beverly Hills Magazine: You’re referring to your character Becky being re-cast with actress Sara Chalke during the fifth season of Roseanne. There are three characters in television that were famously re-cast during the height of a show’s success. You’ve got the two Darrens from Bewitched, the two Lionels from The Jeffersons and the two Beckys from Roseanne. I’m sure you’ve talked with Sarah Chalke at length about her taking over your role all those years ago. What was it like for Sara to step into your shoes halfway through the series run?

Lecy Goranson: I never really had a chance to talk to her until we were on Amy Schumer together. We went out to dinner and it was interesting to hear what she had to say, which was a lot! Anyone who gets a job like that, it’s very exciting, especially if you’re a small-town girl from Canada, which she was. I was talking with some of the other actors about what it might feel like to be a guest star on our show. For me, I know all these people and I’ve worked with them for years, but I still feel like I really have to bring my A-game. There’s a heightened feeling of responsibility in working with such amazing people. I can only imagine how intimidating that was for her, beyond the sheer joy of having a job like that. Stepping into a character that was already established, it was challenging for her. But she stepped into an environment where there were a lot of loving people, and talented people to help her bring her game up.

Beverly Hills Magazine: I’ve heard you say in several interviews that you left Roseanne during the height of its success to have a normal college experience. I have to ask, what prompted you to become a child star in the first place?

Lecy Goranson: I was a dancer and there’s a place in Evanston, IL called the Noise Cultural Arts Center where they have dance, acting, painting and different classes in the arts. I was taking dance classes, and right down the hall was the Piven Theatre Workshop, started by Byrne and Joyce Piven who were coming from The Second City [Comedy Troupe]. I started taking classes there and Burt and Joyce were affiliated with an agency in downtown Chicago. They asked me to go on a couple of open calls. My parents wanted me to be involved in activities because they were working a lot. So that was the amount of their vested interest, just to keep me busy and productive. I did two auditions and the second one was for Roseanne. I think they hired Laurie Metcalf, who was also from Chicago, and I, because they wanted to have some actors that were actually from the Chicago area to give the show that flavor. But yeah, it was a total fluke.

Beverly Hills Magazine: Now it makes sense to me that you would one day, as a teenager and young adult, realize you wanted to step away and just be a college student.

Lecy Goranson: Yes. But after college I had to say to myself, “Look, you love being an actor and this lifestyle of suffering (laughs). This is what you really want.” It’s funny when you have to parent yourself. 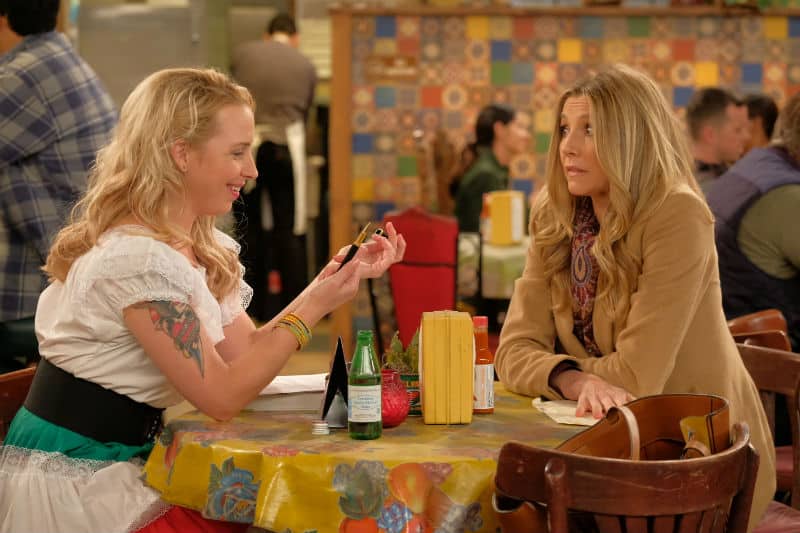 Beverly Hills Magazine: Twenty years later, what are you now bringing to the role of Becky Conner on this Roseanne reboot?

Lecy Goranson: I’ve been doing theatre for so many years. Like any skill, you build muscle by repetition. I’ve also had the privilege of working with great actors in the New York theatre community. The character of Becky is really strong, grounded and wise. It’s interesting re-approaching a character in this way, with all of my own life experiences. And I feel it when I am there; I feel my age! I’ve been around the block, but I think back to my former self as a child and I think, “What was it like?” It’s hard for me to remember a lot of it. There is a part of youth that is so unconscious, and there’s such a beautiful thing about that in retrospect. That unconsciousness gives you a lot of bold confidence.

Beverly Hills Magazine: As an adult, have you sat and watched the old Roseanne re-runs? And do you feel connected to it?

Lecy Goranson: This is a bit of an inside joke. I feel like, “Oh yeah it’s me, but it feels like it is so long ago and distant. Michael [Fishman] and Sara Gilbert have children, and they would sit down with their kids to watch the episodes and tell their kids, “This is what I used to do.” I haven’t really done that. Although you can’t stay away from it, because it’s on so often if you’re flipping through the channels. One of the interesting things about re-visiting the show is to not only have memories come back for me, but to hear other people’s memories, and then to also have this shared feeling come up sometimes of, “We don’t remember anything at all!”

Beverly Hills Magazine: Tell me about growing up with Roseanne Barr and John Goodman as your TV parents and spending countless hours with them as you were growing up.

Lecy Goranson: I’ve always felt really close to John. Our personalities are similar, and I have always felt very connected to him. I hate to use the term “genius” because people throw it around, but they both do have a genius for the work. Roseanne, the way her mind thinks comically, is really advanced. And John is such an incredible actor. His genius is in being so present in every moment and tweaking the script in his own way. He is one of the most present actors I have ever been around. The two of them together are just like a couple of big kids, encouraging each other to go further. They are a great team, and they bring out the best in each other. There is a side to both of them that is just total goofball, and they both love humiliating the kids in a scene. Yes, they get off on embarrassing us. Now that we’re all back together I remember just how much we always laughed.

Beverly Hills Magazine: How about your TV siblings Sara Gilbert and Michael Fishman, who play Darlene and D.J.? What’s the relationship like between the three of you?

Lecy Goranson: I live on the east coast and they’re on the west coast. Apart from Laurie Metcalfe and John Goodman who do theatre in New York occasionally, I don’t see everybody that much. Sara and I are very close. We spent all this time apart and then when we were reunited, I remembered how well we know each other. You can’t help but be close like that if you see each other every day for however many years, and you’re the only two young ladies on the set. Michael is just a doll. He’s turned into such a mature, loving, wonderful person. I feel a lot of pride for the fact that we have turned out pretty good. 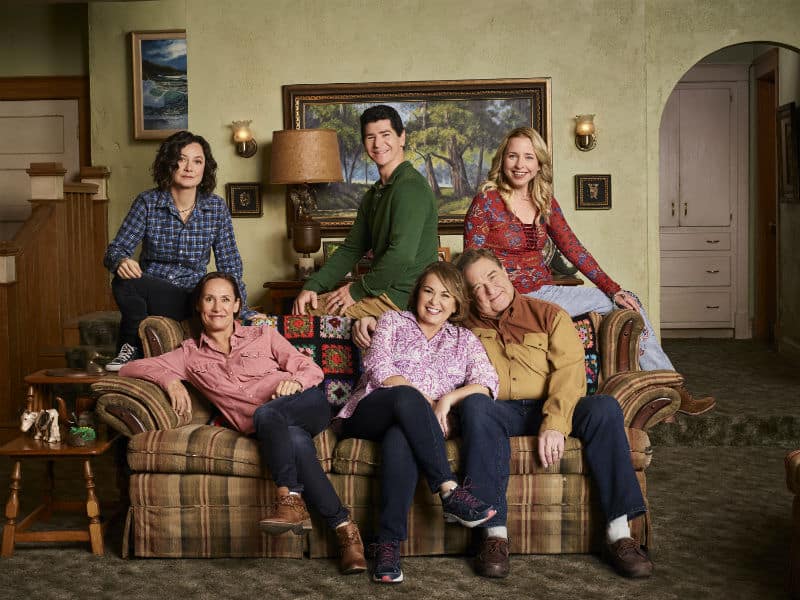 Beverly Hills Magazine: How did a Roseanne reboot come together?

Lecy Goranson: It had a lot to do with Sara. I also know that Roseanne was thinking about doing it for a long time, independently. Michael and Roseanne had been talking about it. It all came together, and Sara took on the role of Executive Producer. When Sara reached out to everyone, we all said, “Let’s do it!”

Beverly Hills Magazine: I love the fact that everyone was game to do it. If you are known and beloved for playing an iconic television character that people identify with, and you are a part of pop culture history, that’s amazing! What’s wrong with that?

Lecy Goranson: I think also the fact that our show is about a family, that there is something appealing about keeping that family unit alive and revisiting them at a later time. Of course, Roseanne is a special show to me, but I do think it’s a special show to a lot of people and the family dynamic that we have makes it special.

Beverly Hills Magazine: Does this Roseanne reboot bring the same flavor, and the same meat and bones as the original?

Lecy Goranson: Oh, absolutely! There are certain episodes we did where we all thought, “This is vintage Roseanne.” It felt like an original episode.

Beverly Hills Magazine: Why should people tune in to watch the Roseanne reboot?

Lecy Goranson: Because it’s the best show on TV, of course!