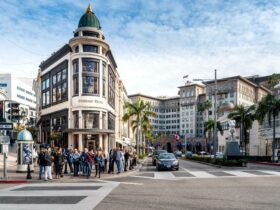 Accessible Days Out In Beverly Hills

Hybrid bikes are a combination of road bikes and mountain bikes meaning they can be utilized in any terrain. It is a do-it-all style of bike for the reason that it can be used for commuting and your biking. They have special features for road and terrain combined that are stable and comfortable over multiple terrains and surfaces and have unique designs making it one of the most popular as being used by most cyclists, commuters, and children everywhere.

This bicycle generally has thinner tires that are wider than those of a pure road bike, but narrower than mountain bike tires. The best hybrid bikes nearly always have flat handlebars and a more upright position that allows the rider to sit with a straighter back than on a road bike for the better posture of the rider. It is equipped with disc brakes to provide more powerful stopping and is more credible in wet weather than rim brakes; this is to give better protection than any other ordinary bike. Cross red bikes offer a balance of lightweight speed and a pleasing ride when in use. As to its cost, it is less expensive than sportbikes and other technical bicycles. This lets a cyclist save money and enjoy a great bike for less than the expense. Hybrid bikes were produced for everyday use and not for tournament bikes. Among the above-mentioned features, I believe that one of the significant ones that can get out of this kind of bike is the comfort they can get in using these bikes.

A commuter bike is a hybrid bicycle made for riding over both short and long lengths, for it helps the rider commute safely and rapidly from one place to another. This type of hybrid bike is good for people who are constantly on the go and need a quick means of getting to any destination. Another great bike good for city use is known as the name suggests a city bike, made sturdier with broad, heavy-belted tires that give them the capacity to resist all kinds of things you may find on the city streets, including unpaved roads, shattered glass, potholes, and more. It is useful even better in any climate for easy strolling around the town. Lastly, there is one type of bike designed for any recreational use, it is known as cross bikes. It is suitable for muddy and sandy roads.

Hybrids are extraordinary bicycles for riding in metropolitan environments and are also able to handle light off-road trails. Bikes like this put the cyclist in a position that is safe to most since it is not forceful but not too relaxed either; Because of the versatility offered by hybrids, most people tend to want this kind of bike particularly if they aren’t exactly certain of what kind of riding they will be into in the long run. Always take into account what you’ll be using the bicycle for. There is no point in getting a mountain-bike-style hybrid bike with suspension travel if you are only going to be commuting to work on flat paved roads. Know the intention first before buying and using a bike for every bike has its use and purpose.

Cycling can give a lot of benefits to our body weight because it is a good form of exercise plus it is environmentally friendly because it does not emit any hazardous waste that can be a sort of poison to our body. Biking can even improve our coordination, posture, and balance that is effective in protecting people from falls and fractures as we age. It is a form of transportation that is of low maintenance and can even allow a person to save money. The drawback I can think of in using a bicycle is first, the risk of an accident but this can be prevented if the cyclist follows traffic ordinances, by using bike lanes often and using safeguards, wearing safety gear, and right attire while going through the crossroad, and busy areas. Second, using a bike as a mode of transportation is a limited travel distance. Traveling long miles and uphill is tough and requires a lot of effort and energy. Lastly, bicycles are of limited use for storage when traveling as compared to using an Automobile. Well, it is so obvious isn’t it that a bike has a small and limited space and because of this cyclists wear a backpack to carry out their needs.

It is true that bicycle commuters are healthier, more productive, and require less time off at work which is what most employers are trying to accommodate for they believe that healthy workers are better workers. Cycling is a healthful, low-impact activity that can be admired by people of all ages, from young children to older adults. The bicycle has had a considerable effect on human society, in both the artistic and industrial domains. Cycling is not only a lot of fun, but it also engages people and fosters relationships especially among family members by putting the entire family in action.

This mode of fun seems to be the most sought after especially among families. Parents train their young for their first bike lessons, and it can never be forgotten by most people as their first experience of fun learning how to balance and pedal a two-wheel bicycle. Most people have lots of fun despite having their skin being scratched by their many falls upon learning how to bike. It doesn’t matter for as long as they have been wanting to learn to bike. As people grow to adulthood and eventually have a family of their own, these experiences they will treasure throughout their entire life.

There is still a lot to say and include about using bicycles but in the meantime, I will stick to these important common issues about Hybrid bikes. Pedal with care and be safe always.