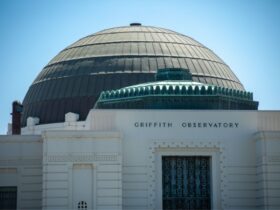 Educational Places to Visit in Los Angeles and Hollywood

Laura Wilson is one of the most sought-after fitness experts in the country who specializes in Pilate.  In 2005 she launched Natural Pilates, a form-focused athletic approach to classical Pilates that helps increase strength, improve flexibility and gain mindfulness.  She began with one studio in Beverly Hills, California and for 10 years she grew her clientele eventually adding locations in Brentwood (2017) and West Hollywood (2019).

Today, she is busy preparing for the openings of two more studios – one in Sherman Oaks at 15222 Ventura Blvd. on September 8th and another in New York City’s SoHo neighborhood at 206 Spring Street on September 15th.

Wilson’s success has been one of discipline and focus that began in her native country of Romania where she grew up a gymnast, dancer and member of Romania’s National Archery team winning two national titles.  Through an inter-exchange student program in college, she arrived in America in 2002 at the age of 21 with just $100 in her pocket.  Wilson took a job as a housekeeper in New Jersey, cleaning houses and motels until she saved up enough money to move to LA where she enrolled in a massage therapy program.  While working at a physical therapy clinic, she was introduced to Pilates and recognized the many benefits it could offer athletes like herself for full-body conditioning, injury prevention and rehabilitation. In fact, the physical therapist she worked for, recommended Wilson pursue her Pilates Certification regardless of her English not being that great…however she could speak the language of fitness and a whole new career path was opened.

Through her continued hard work and determination, Wilson was able to establish a Pilates empire in both Los Angeles and online and the Natural Pilates training method was born.  She was also able to fully self-finance the first studio and the other locations that followed.

Unfortunately, a year after opening the West Hollywood location, Wilson was faced with the COVID-19 pandemic.  She became aware about potential COVID closures two weeks before it hit the U.S. because she was in close touch with friends in Romania who were witnessing it.  Concerned about finding a solution for everything she had built; Wilson held an emergency meeting with her staff explaining what was about to happen.   She safely maneuvered her business and clientele by moving two studios outdoors, revising programming schedules, setting up Zoom classes & sending goodie bags of props (bands, weights, fitness circles, etc.) to attendees while not having to lay off any staff.  At the same time the shutdown was happening, Wilson immediately launched Natural Pilates TV, an online subscription that provides access to Pilates anytime, anywhere with over 250+ mat/reformer workouts for every fitness level.

Wilson’s perseverance and drive are qualities that stem from her upbringing in communist Romania, her background in competitive sports, and her pursuit of the American Dream.  Whether she’s teaching clients or running the studio businesses, Wilson is very much at the center of the action. It is through her numerous certifications (Stott Pilates-2005, Gyrotonic-2008,Vinyasa Yoga-2011, Resistance Training Specialist and Muscle Activation Technique Specialist-2012), training and extensive knowledge of the body that enables her to provide the most comprehensive workouts tailored to each person’s individual needs.  Together with her team, Wilson trains teens, adults, and even active seniors as well as athletes and anyone recovering from injuries.