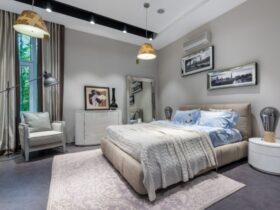 All That You Should Know About the Murphy Bed

Bonhams New York presents a superb selection of dazzling Tiffany leaded glass lamps and Favrile glass vases from a prominent American collection on December 17 at 10 a.m. E.S.T.  Assembled over the past three decades, this outstanding 25 lot grouping captures the essence of famous American designer Louis Comfort Tiffany’s quest for beauty, his love of nature – particularly flowers – and the coming together of glass and design.

“Every object in the collection was thoughtfully chosen for its artistry, color palette and technical brilliance,” said Bonhams’ Director of 20th Century Decorative Arts Beth Vilinsky. “These qualities are beautifully reflected in notable sale highlights such as a jewel-toned Peony table lamp (est. $100,000 – 150,000), the first major lamp to enter this private collection.”

Tiffany was familiar with the Japanese decorative arts, and it is, therefore, not surprising that he created lamp shades depicting peonies – a flower long treasured in Japan, Vilinsky said.

The sale also features a Snowball table lamp (est. $100,000 – 150,000). While more subtle in its colors than the Peony, it is equally breath-taking with its large white blossoms that are perfectly complimented by the surrounding rich greens leaves and blue background.

The top lot is an exceptional Daffodil lamp (est. $140,000 – 180,000, pictured to the right). Widely produced between 1904 and 1924, the model was one of Tiffany Studios’ most popular and the lamp for sale is an early example. The lamp rests on a rare blue Favrile glass and bronze base.

Highlights from The Artistry of Tiffany: Selections from a Prominent American Collection will be on view at Bonhams New York, 580 Madison Avenue, Dec. 12-16, 12 p.m.-5 p.m. E.S.T.

ABOUT TIFFANY
Louis Comfort Tiffany (February 18, 1848 – January 17, 1933) was an American artist and designer who worked in the decorative arts and is best known for his work in stained glass. He is the American artist most associated with the Art Nouveau and Aesthetic movements and was affiliated with a prestigious cooperative of designers known as the Associated Artists, which included Lockwood de Forest, Candace Wheeler, and Samuel Colman. Tiffany designed stained glass windows and lamps, glass mosaics, blown glass, ceramics, jewelry, enamels and metalwork.

In 1878, Tiffany’s interest turned towards stained glass, and he opened his own studio and glass foundry. His inventiveness both as a designer of windows and as a producer of the material would become renowned. Tiffany wanted the glass itself to transmit texture and rich colors, thus, he developed a type of glass he called Favrile. Patented in 1892, Favrile glass often has a distinctive characteristic that is common in some glass from Classical antiquity: it possesses a superficial iridescence, causing the surface to shimmer with a degree of opacity. This effect was obtained by mixing colors of glass together while hot.

ABOUT BONHAMS
Bonhams, founded in 1793, is one of the world’s largest auctioneers of fine art and antiques. Today, the auction house offers more sales than any of its rivals. The main salerooms are in London, New York and Hong Kong. Sales are also held in the UK in Knightsbridge, Oxford and Edinburgh; in the U.S., in San Francisco and Los Angeles; in Europe, in Paris and Stuttgart and in Sydney, Australia. Bonhams also has a worldwide network of offices and regional representatives in 25 countries offering sales advice and valuation services in 60 specialist areas. For a full listing of forthcoming sales, plus details of Bonhams specialist departments, please visit www.bonhams.com