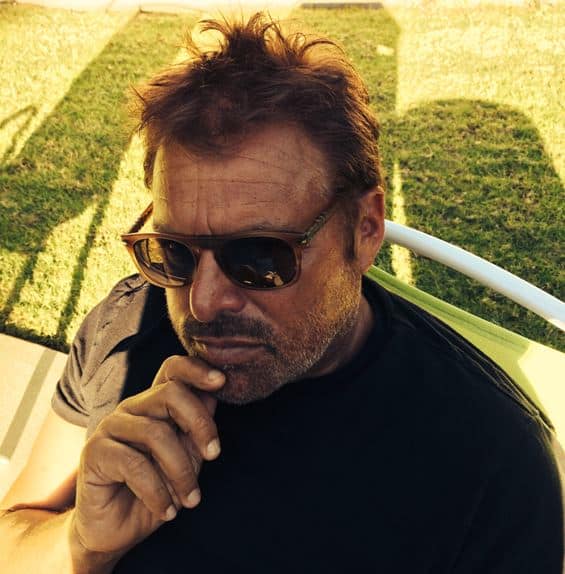 South African born, Michael Oblowitz, grew up in a Cape Town where he lived by the warm watered beaches of the Atlantic Ocean. He describes his childhood as idyllic, though in retrospect he was unaware that he was living in the midst of the greatest political crimes of the 20th century, the apartheid. As he grew older, he realized that something was very wrong with the way of life, the segregation and oppression that had taken over society. The irrefutable abuse of power was overwhelming.

He speaks of his mother and father fondly, though he is moved emotionally while telling of their struggles of Jewish persecution. His father was a refugee from Lithuania who escaped the Nazi invasion, but lost his family while he was fleeing for his life.  After the war, he met Michael’s mother and so their love story began.

But it’s this history of surviving at all costs, of escaping the wiles of an “evil” government that gave Michael Oblowitz his unique perspective of the world, and has greatly impacted his directorial work as a creator of motion pictures today.

Beverly Hills Magazine: When did you discover your passion for directing?

As a kid I was very outgoing, everyone thought I would become an actor, but I was terrified on stage. During Battle of the Bands at school one year, I remember photographing the performers and capturing all the behind the scenes action, and I loved it. I knew then that this was something I really wanted to do.

Growing up we lived near Athol Fugard, who at the time, was a very famous playwright known for his intensely political works. He always delved into the darkest aspects of society and caused the world to confront the harsh realities of life head on. I became fascinated by the deviant and dark elements of life, which is why my work sometimes leans toward more anti-commercial projects which allow my creative freedom of personal expression.

Beverly Hills Magazine: How did you get started in the industry?

During my college days, I studied fine art, art history and philosophy in South Africa, and then I studied photography in London, after which I found myself in New York, which is where I studied film. I learned about independent film, history of cinema, film making, and the inner workings of Hollywood. It was at that time that I made decisions about who I wanted to be and what type of work I wanted to do. I had also discovered the Sex Pistols at that time, and was very much influenced by the anti-commercial social rebellion of that generation. So I don’t like big Hollywood films, I like to create things that are different, even a bit adversarial. So I started directing music videos; I was one of the first rock video directors in New York for stars like David Bowie, Eric Clapton, Carol King, and more. I mastered my craft and it naturally developed into filmmaking.

Hollywood is a tough place. It’s got a tradition that has been in place for years and years. It’s not for the faint of heart.

Beverly Hills Magazine: What are some of the trends taking place in Hollywood today?

I made a lot of films during the 70’s and 80’s which are going to be featured at The Museum of Modern Art alongside my colleague and long time friend Kathryn Bigelow. During that time it was the golden era for independent cinema. The old Hollywood system was very structured and restricted by codes and regulations during the early 1900’s. Since then, there’s been a disintegration of the system. There’s less conformity now. There are far more independent thinkers and producers, with lots of immigrants from Australia or England achieving great success in “Hollywood.” Studios are mainly distributors now, which only make up one element of the deal. So today, Hollywood is anyone’s game.

Beverly Hills Magazine: What advice would you give to aspiring directors?

Make sure you stay on budget and create projects that are attractive to major talent. If you can brand yourself with a unique style that is easily identifiable, like Tarantino for example, you will have a greater chance of success and getting your films financed.

I’ve realized that films today represent a certain standard of what modern art is supposed to be. Story telling has been a part of mankind since the beginning of time, now it has merged music, technology, and visual effects into the process. When I create a film by bringing all these art form together into one, I remember that this film will live on and it will have my name on it. When I’m doing a project, I believe that it is the best work that I’ve ever done. My purpose is to create things that live on long after I’m gone, to create something timeless. You see, the artists’ vision is the most important thing in the world…and through film we can keep it alive.

All the way from South Africa, after a life long journey bearing witness to life’s greatest challenges as well as its triumphs, Michael Oblowitz continues to create his own legacy, staying true to himself in all that he does and brings to this world. For every work he creates, he knows, truly becomes a keepsake for the next generation.