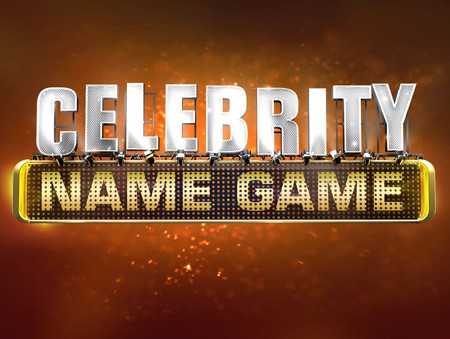 Celebrity Name Game is a hilarious new game show that combines the best of pop culture with the best of comedy. The syndicated, half-hour weekday strip premieres on September 22.  Hosted by Emmy-nominated funnyman Craig Ferguson and executive produced by Courteney Cox and David Arquette, the program is currently set to air in more than 93% of the country, including the Top 50 U.S. markets.

Celebrity Name Game is co-produced by FremantleMedia North America and Debmar-Mercury and is distributed domestically by Debmar-Mercury and internationally by FremantleMedia North America.  The show was developed by Coquette Productions based on the popular board game “Identity Crisis,” created by Laura Robinson and Richard Gerrits of North 44 Productions.  In addition to Coquette’s Cox and Arquette, executive producers include FremantleMedia’s Thom Beers and Jennifer Mullin, and veteran showrunner Scott St. John.

Fast-paced and funny, Celebrity Name Game pairs celebrities with contestants in order to identify famous names – actors, singers, athletes, pop culture figures, politicians, even cartoon characters – based on improvised clues.  Over the course of three speed-rounds, teams vie for up to $20,000 in a competitive, yet party atmosphere, even getting members of the studio audience involved to win special prizes.

“It’s so much fun bringing a game we love to play, a game that everyone we know plays, and spicing it up for everyone across America to play together,” says Arquette.

Craig Ferguson, following ten successful seasons of The Late Late Show with Craig Ferguson, segues into hosting duties for Celebrity Name Game, bringing his improv comedy genius and high-energy Scottish appeal to the game show arena.  “You know the way you love outtakes at the end of a movie, because you see what really happens?  I think that’s what the energy is in this show all the time,” says Ferguson.

Along with executive producing Celebrity Name Game, Courteney Cox and David Arquette will participate in several episodes, along with some of their friends. Says Cox, “We are such huge fans of game shows and believe this has the potential to truly stand out.  We want viewers to have as much fun watching this series as we have had playing it with friends, many of whom are also big fans and want to be a part of this.  Add in Craig, who is hilarious, and we have something really special here that will resonate with viewers.”

Debmar-Mercury has sold the syndicated series to Tribune Broadcasting stations, which at premiere, will air on Tribune stations in 40% of the U.S., including WPIX New York, KTLA Los Angeles and WGN Chicago.