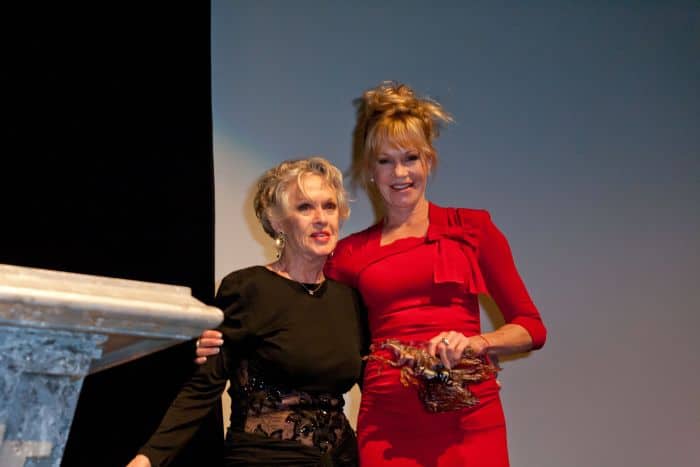 Melanie Griffith presented her mother, Tippi Hedren with the festival’s Lifetime Achievement Award, where she was recognized for her for dedication and career in film. Miss. Hedren, known for her role as an American actress, fashion model and animal rights activist, stars in the Bel-Air Film Festival’s Los Angeles Premiere documentary of HAPPY HANDS, directed by Honey Lauren, which chronicles how she helped to create and assist Vietnamese nail salons in the United States.

Emily Ferry, the first woman to be an I.A.T.S.E. Property Master in Hollywood was honored with the festival’s Leadership in Cinema Award. Miss Ferry, a leader among film professionals, has worked on numerous Oscar nominated and winning projects. Most notably, she is known for her work on MEMOIRS OF A GEISHA, MATILDA, GATTACA, ED WOOD, and HOW THE GRINCH STOLE CHRISTMAS.

The festival was the official red carpet Los Angeles Premiere for the feature film, JUST BEFORE I GO, directed by Courteney Cox, starring Seann William Scott, Olivia Thirlby, Garret Dillahunt, Kate Walsh, and Evan Ross. The synopsis is a story about being on the verge of giving up on life, and the lead played by William Scott, travels to his hometown to make amends. The evening also debuted the Los Angeles Premiere for the short film I’LL BE HOME SOON, directed by James Everett, starring Mouna Albakry, Agata Buzek an Okorie Chukwu.

Beautiful celebrities, producers, directors and more joined the celebration to honor Tippi Hedren for her Lifetime Achievement has been truly remarkable, with her lovely daughter, Melanie Griffith, also following her footsteps of film career success. The two beautiful women amongst many more successful artists filled the evening with joy and remembrance of things accomplished. The Bel Air Film Festival was another smashing success, and we are greatly looking forward to next year’s festival.