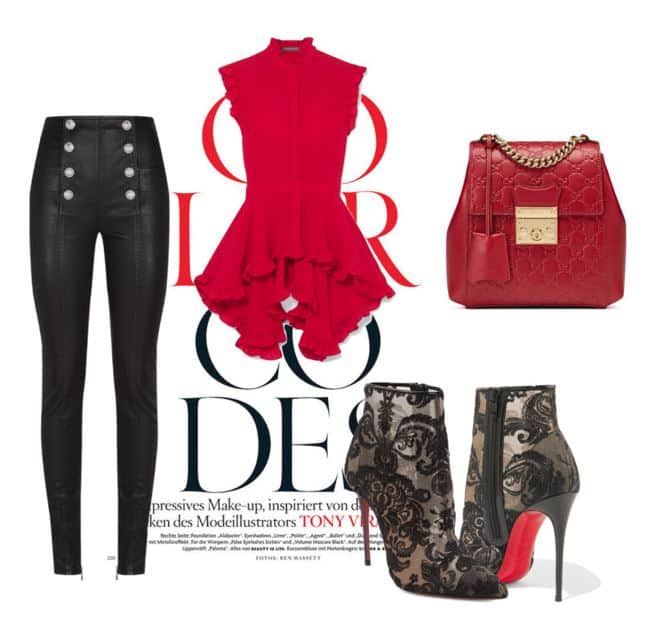 As Monaco prepares to host the sixth leg of the 2019 FIA Formula One Grand Prix and parties for the glitterati attending it, the Monaco Red Cross is also getting ready. (Image Credit: Ed Wright Images)

The headquarters of the organisation, which was created in the Principality in 1948 by Prince Louis II of Monaco, are a few streets away from the hairpin bend in Monte Carlo where some of the race’s most nail-biting moments take place. It’s also in this district that some serious Monaco property investments are made.

Claude Fabbretti, director of the first aid section of the Monaco Red Cross,and his deputy Viviana Fraval are calmly working on logistics. They are old hands at this. Claude has been a permanent Red Cross employee since 1995 and also heads the organisation’s international humanitarian programmes. Viviana joined the first aid section 15 years ago and, like Claude, was a Red Cross volunteer for years before.

Both seem very proud of their teams and rightly so. In 2018, Monaco Red Cross first aid volunteers worked at 275 cultural, social and sport events, which amounts to a presence of five days every week throughout the year.

“That represents tens of thousands of hours of volunteer work,” says Claude.

The Grand Prix is Monaco’s biggest, most high-profile event. According to the FIA, it was attended by 200,000 people in 2018. In a country with a surface area of just 2.02 square kilometres and a population of less than 40,000, its impact is huge. 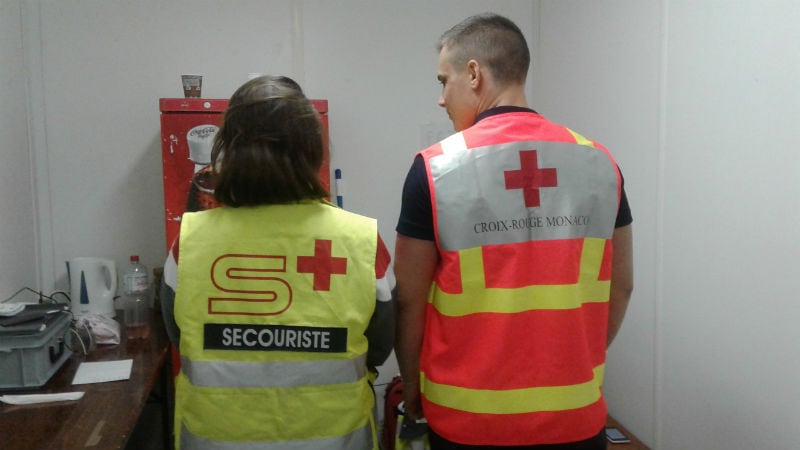 The Monaco Red Cross has been involved in the Grand Prix since 1950, the first year of the FIA Formula One World Championship.

A lot has changed since then and Red Cross ranks at the event have swelled. For the 2019 Monaco Grand Prix, 250 first aid workers and nurses will be present. Other Red Cross volunteers will manage 17 ambulances with the carabiniers – the palace guards –who have all had military first aid training. Red Cross volunteers from nine countries – Switzerland, Luxembourg, Liechtenstein, Belgium, Germany, the UK, Monaco and its neighbours, Italy and France, will work at this year’s Grand Prix.

“Some countries, like the UK, or Belgium – which we have worked with for 20 years – even have a competition to decide who can come here,” says Claude. “But we’re also able to send our volunteers to events such as the Belgian Grand Prix at Spa Francorchamps.”

Working on the ground

During the Grand Prix, the volunteers are distributed across several geographical sectors. Usually, two Red Cross first aid workers and a doctor from the Monaco Automobile Club (the event organisers) are placed with the team of stewards.

“They’re there to carry out interventions on the side of the track,” explains Claude. “They may, for example, deal with injured stewards or photographers – anyone who is authorised to work on the edge of the track.”

But the organisation’s main activity is ensuring the safety of spectators.

“The Monaco Grand Prix has the particularity of taking place on a circuit that runs through the city,” Claude points out. “There are many different grandstands and public accesses.  We have teams in place everywhere the public is present – on balconies, terraces, grandstands and on the grassy slope at the foot of the Rock.” [the promontory on which Monaco’s old town and Prince’s palace stand]

Claude explains that unlike classic Grand Prix circuits, there are very few run-off areas along the track.

“A driving error can lead to a car violently crashing into the rails,” he says. “That’s why there is a very high number of stewards.”

The Monaco Red Cross trains with the stewards, firemen and the Automobile Club.

“Our fear is that, when a car hits a rail, carbon fibre debris will fly into the grandstands that are a few metres from the track. That’s why there are more – and much higher – fences now. The debris could injure a lot of people. It’s never happened but we have to prepare for that.”

The first aid volunteers are highly trained and are also prepared for the particularities of a Grand Prix in a city. One instruction that is drilled into them is to never lean against a safety rail.

“When a car hits a rail, it can deform it by 50 or 60 centimetres and there is a ripple effect over a few dozen metres,” says Claude. “If I’m leaning on a rail and a car hits it 100 metres away, I’m going to be violently projected forward. You can’t imagine it unless you’ve seen or experienced it.” 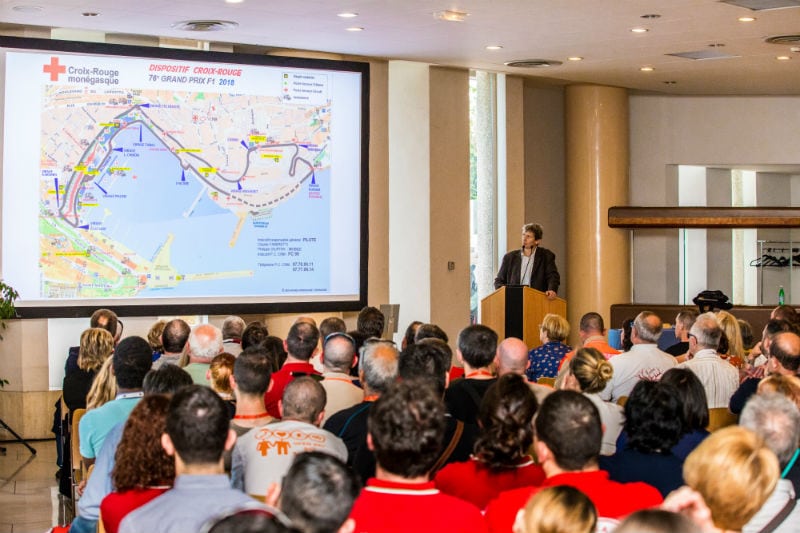 In 2018, the Red Cross carried out 118 interventions and 17 evacuations to hospital during the Grand Prix. The most frequent interventions during the event are for sunstroke, heatstroke, sunburn, cuts and sprains. F1 mechanics are sometimes treated for burns.

All the first aid workers have their anecdotes about the Grand Prix. Viviane recalls that one year, an entire F1 team had food poisoning.

“The next day they all came to see us,” she says. “They were really not feeling well – they had suffered all night.” Claude remembers an incident on the grass sector of the Rock. A lot of people had arrived very early in the morning or the night before.

“They’d had a lot to drink,” he says. “They climbed up trees and the rocky banks and, during the Grand Prix, it started to rain. The trees and rocks became very slippery and we had to deal with between 15 and 20 injured people within half an hour.” 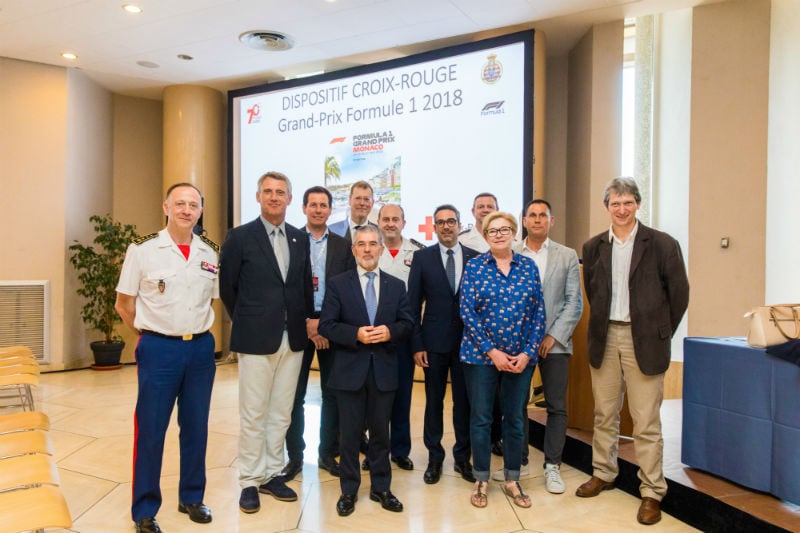 In most of the Grand Prix sectors where the Red Cross is present, there is a pool of doctors.

“When they can’t treat a patient on the spot because of the noise and agitation or the lack of infrastructure, they ask us to transport the patient to hospital,” says Claude. Moving around Monaco during the Grand Prix is notoriously difficult and evacuating a patient to hospital requires efficient coordination and a police escort.

“The ambulance leaves as soon as it can, either between two races or because it’s strategically situated outside the circuit and can leave even if the cars are on the track,” says Claude.

This year, the Red Cross will be testing an IT tool for the real-time monitoring of casualties. 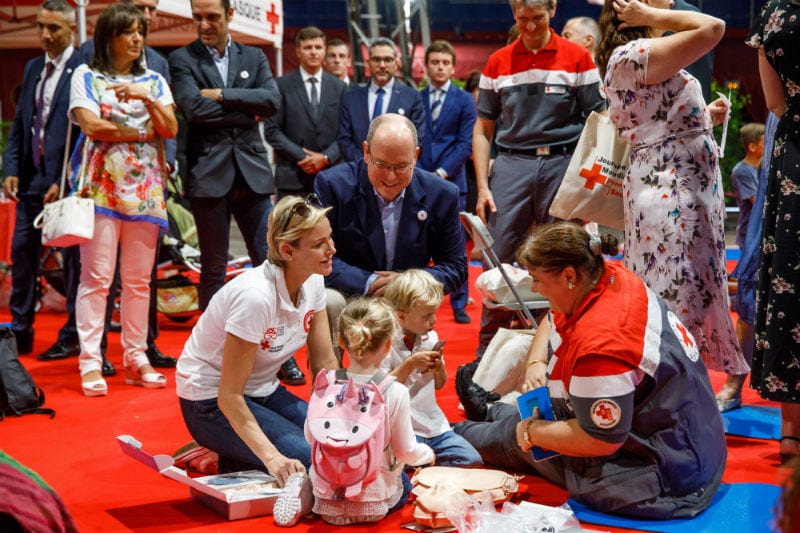 Prince Albert II, president of the Monaco Red Cross, and his wife Princess Charlene take the time every year to greet the first aid workers between the races or at the team briefing.

The prince is very active in the organisation.

“Whether it’s a case of taking important decisions for our national society, the General Assembly or the executive committee meetings, he’s there. For us, for our volunteers, it’s a huge privilege to feel that he’s so involved.”

When the Red Cross teams take up their positions on Thursday 23 May, they can expect busy and unpredictable days ahead.

“For us it, it’s four days of intense work,” says Viviana. “But it’s also four days of sharing and conviviality because we all get to know each other over time. It’s very satisfying to see that, despite the different languages, we’re all united in our approach.” 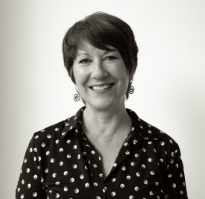 About The Author: Marianne Burkhardt is a trained journalist who has held roles in media and communications for 30 years. She was head of the Montreux Jazz Festival press office, corporate communications manager at the FEI, the world governing body of horse sport, and editor at the International office of Médecins Sans Frontières. She has written for numerous publications, including the Swiss Broadcasting Corporation’s English language news website, Time Out and The Local Switzerland.