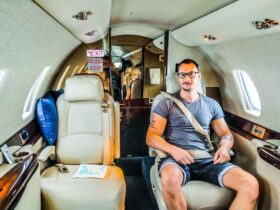 12 Considerations When Chartering a Private Jet

Brad Pitt is recognized as one of the best actors in the 21st century. He has gone from big to the big screen, gracing several blockbusters and collecting awards. In our Hollywood Spotlight, we will take you through his journey and his success in Hollywood.

Brad Pitt first got recognized as a Cowboy hitchhiker in the Ridley Scott road film Thelma & Louise, but he started his career as a thought. He was close to graduating with a degree in Journalism from Missouri. Still, his love for movies made him anxious about settling down. Since movies were not made in Missouri, he left for Los Angeles when he had just two weeks to complete his coursework for a degree.

While trying to establish himself in Los Angeles, he worked odd jobs and joined acting classes. His acting career began in 1987 with uncredited roles in the movies No way Out (1987), No Man’s Land (1987), and Less than Zero (1987). After that, he appeared in different soap opera series on small episodes before moving to bigger films in 1988.

The Dark Side of The Sun, shot in 1988, was his first leading role. He played the role of a young American boy taken by his parents to the Adriatic to find a cure for a skin condition. Unfortunately, the film was not released until 1997.

In 1989, he made his first film that hit the theatres, a cutting-edge horror film: Cutting Class. For his role in the movie, Legends of the Fall, based on a novel of the same name, he got his first Golden Globe Award nomination.

From 1999, Brad Pitt rose fast to fame. He played Tyler Durden in the movie Fight Club. Pitt prepared for the scenes with boxing, taekwondo, and grappling. Brad Pitt said the movie gave him the experience of hurting or taking out his aggression on someone else and feeling it yourself.

Critics praised Pitt’s performance in the movie and commented on his ability to play cool and charismatic. In 20004, he had two major film roles playing Achilles in Troy and reprising his role, Rusty Ryan in Ocean’s Twelve.

In 2005, he starred in the comedy Mr. and Mrs. Smith alongside Angelina Jolie. The movie gathered somewhat negative reviews for its plot. Still, it garnered positive reviews and $478 million because of the onscreen chemistry between him and Angelina Jolie.

Brad Pitt’s next leading role came in 2009 with Inglourious Basterds, which premiered at the 2009 Cannes Film Festival. He also played the role of Metro-Man in the 2010 animated movie Megamind.

He moved on to World War Z in 2012, which became his highest-grossing picture with about $540 million. After that, he began focusing on his production company, Plan B, while playing other major roles in movies like Once Upon a Time in Hollywood, where he starred opposite Leonardo DiCaprio. The film was released in 2019.

Brad Pitt has achieved quite a lot in Hollywood, but he is not done. He has 4 projects underway, and we can only expect more thrill. Use his social media to keep tabs on the development of these projects.