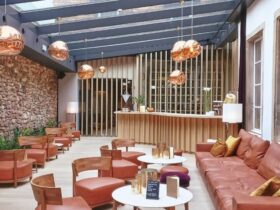 Things To Consider While Designing A Spa

There was once a time where food was simply a means to get sustenance. It was a means of filling one’s belly, getting energy and staying alive. But then it became an art. It became a way for people to express themselves.  A way for chefs to dance with their food and create something spectacular on a plate. With imagination, creativity, and thinking that ran as far away from the box as possible dining has changed forever.

But even this isn’t enough anymore. Yes, people still want fine dining, but they want their evening to be an experience too. As such, we have seen a sudden rise in experiential dining, dining that doesn’t want to be restrained by tradition in any shape or form, not least their location.

And to explore the new world of fine dining experiences, we have made a list of some of the most staggering and unique meals you could ever imagine. Delicious.

Dine In A Thai Treepod

There is a resort in Thailand called Soneva Kiri that offers its guests the chance to embark on what can only be called adventurous dining. Sat in a nest big enough for four, guests here get to enjoy canapes while sat amongst the canopy of a dense forest, a jungle, suspended in the air above the gorgeous Thai coastline. But if this isn’t enough to blow your mind, the way the waiters serve your nest will because they move about on zip-lines, serving food grown in the resort’s organic gardens. Now that’s an experience.

Many diners have dreamt of being able to eat at The Fat Duck, Heston Blumenthal’s flagship restaurant, and the reason is the food. It offers nothing unique in location, but what it lacks there it makes up for in culinary imagination. The techniques are staggering, and through the use of special equipment like that supplied by https://www.extractz.com/ it manages to mix cooking with science. Snail porridge, bacon ice-cream, nitro-scrambled eggs, white chocolate and caviar veloute, salmon poached in licorice and so much more. This is a mouth-watering experience like no other.

Wine Dining At Its Best

When it comes to fine dining with wine, there is only one place to look; Napa Valley. What makes this experience so special is that you are being served some of the most delicious food while seated in restored Visa Dome cars and Pullmans from the 20th Century. Yup. You get to enjoy your meal while gliding through the vineyards of California. Now that is style. Fine wine, top-class food, and a mahogany train; it is the kind of thing Gatsby would have done.

It is in Washington state and it is in a huge, no, a ginormous old steam boiler. That’s right. As you can see here http://steamplantspokane.com/restaurant Stacks is a restaurant that offers a truly unique experience. It pays tribute to the era of Industrial Revolution having restored an old industrial steam plant unit and the massive steam boiler that ran it. Surrounded by shining steel, you can enjoy dishes that include Manila clams and pale ale that is brewed right there on site. Wow. Dining in restaurants has gotten immensely creative and far more exciting!