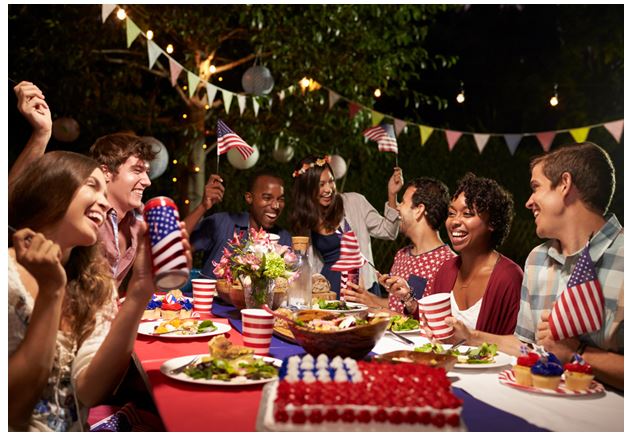 How to Throw a Memorable Independence Day Party

David Guetta has become a music impresario, churning out beat banging, genre busting pop songs that have been topping the charts for nearly a decade with mega hits like Titanium featuring Sia; Where Them Girls At featuring Flo Rida and Nicki Minaj; Club Can’t Handle Me featuring Flo Rida; Who’s That Chick featuring Rihanna and I Gotta Feeling featuring The Black Eyed Peas. Guetta is the King of Collabs. His creative input on a song almost assures chart topping status and his fans have dubbed his music, “Guetta-blasters,” an homage to his bold immersion into hip hop culture, and his constant and effortless ability to blend hip hop and pop music with an addictive beat.

Born in France to liberal intellectuals who shunned materialism, Guetta says he yearned for a more glamourous life, which he soon discovered in Europe’s underground club scene where he began deejaying as a teenager. He also fell in love with all things American, as he described to me, delving into American books, movies and music, and yearning to conquer the stateside music scene.

During our conversation we discussed his seventh, yes seventh, studio album, simply titled, “7.”  It’s an eclectic, genre-fluid collection of emotionally charged lyrics and hypnotic melodies. Of course, the album is full of Guetta’s famous collaborations with the likes of Sia, Jason Derulo and Justin Bieber. 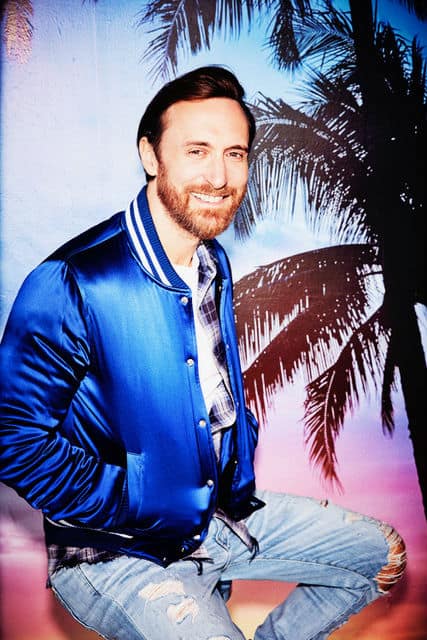 Beverly Hills Magazine: Was your creative vision, of merging electronic dance music with urban music, there from the start, or did it evolve into that because of the opportunities that came your way?

David Guetta: This may sound crazy, but when I was a kid and I began deejaying, there was no electronic music (laughs). When I was a teenager I was playing funk, and then I went to hip hop and then house music. That’s why for me, it’s kind of natural, because I come from this culture. Then I just moved to a different style, and one day I was able to merge them together. I love music, in general. I like to create emotions with my music, and I like to make people dance.

Beverly Hills Magazine: You’re the first deejay I’ve seen that has been able to transcend, not just across various musical genres, but you have been able to get to the point where you’re considered a mainstream recording artist in your own right. How did you create this space for yourself that really didn’t exist before?

David Guetta: Exactly! That’s what is so interesting to me. The world is a certain way, the music industry is a certain way, and if you want to be part of certain “family,” you’re told, “This is the way things are done.” To me, you don’t have to follow those rules. I created my own rules. At that time, I was extremely criticized for this. And then everybody did the same. I want to create my own rules, basically. That’s how I have always been doing it, and that’s how I’m doing it now. I just finished my album (7, out September 14th), and it’s very eclectic. 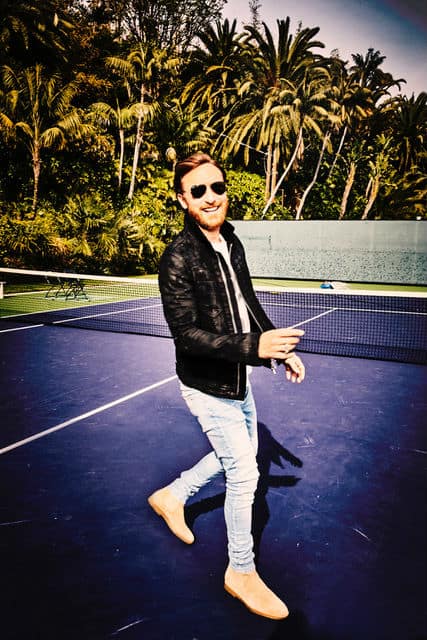 Beverly Hills Magazine: Yes, it certainly is. Every song on your new album has a completely different sound and emotional tone to it. From your perspective, is there any one theme that ties the album together?

David Guetta: This album is called 7. It is my seventh album, but the number seven also represents the end of a cycle; a week is seven days, the creation of the world in the bible is seven days and my birthday is on [November 7th]. That number is kind of mystical to me. What I did with this album, we were talking about how I merged different styles in the past and created a new style of pop music. I wanted to go back to my roots and do a full pop album in different styles. I’m going to do a full electronic album that is completely going back to my roots and being completely underground. So basically, instead of compromising, I’m going to create those powerful moments with an album that I could play in the festivals, in the clubs, and be able to have played on the radio. It came down to either being very pop or hip hop for the radio or being underground again in the clubs. I wanted this album to be real. There is this one record that I really love, which was released in Europe, that is called Don’t Leave Me Alone. It’s one of my favorite albums. It’s pop, but it’s electronic and forward thinking, and it doesn’t sound like anything else out there. I also have Latin records and a huge record with Jason Derulo and Nicki Minaj.

Beverly Hills Magazine: Is there a difference for you, when it comes to collaborating with male artists versus female artists? Do you take a different approach?

David Guetta: Not really. Sometimes I will write with a male artist and we will have a female artist sing it. This happens a lot; or even the other way around. If you want to go higher in the notes, of course you would do that with a female artist. Also, you’re not going to necessarily tell the same story in the music with a male artist versus female, even though things are changing, and I love this (laughs)! I think that things are a little bit less stereotyped right now. 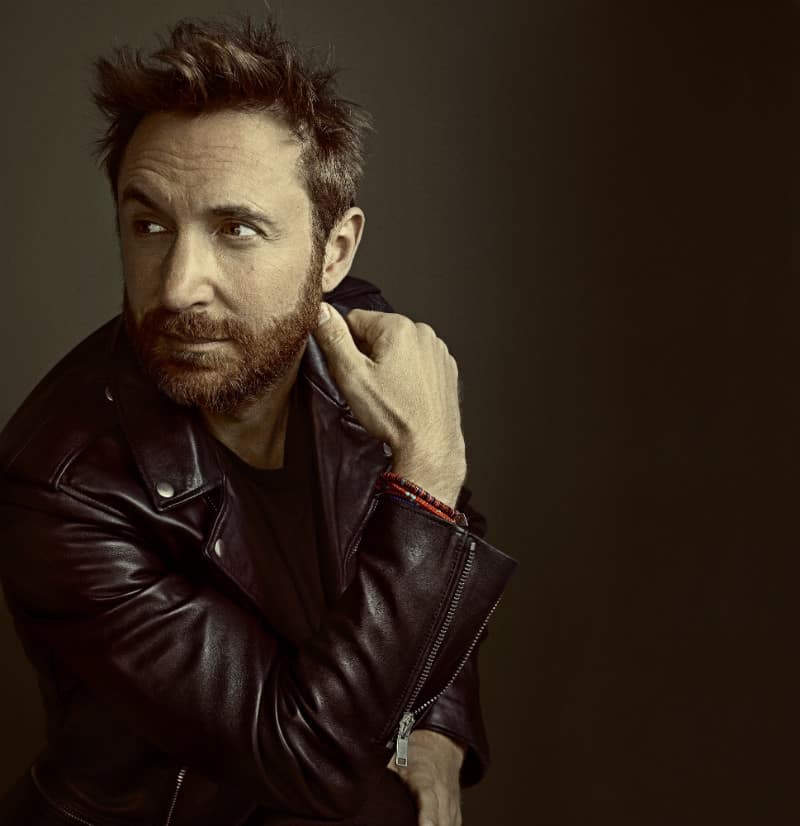 Beverly Hills Magazine: Tell me about this special creative synergy that you and Sia share?

David Guetta: It’s incredible, because first, we have a lengthy history together. Sia, when we started to work together, was not the big artist she is now. We created [the song] Titanium (from Guetta’s 2011 5th studio album, Nothing but the Beat) together, which was, for both of us, a life changing record. Sia deserves every success she has. She is my favorite artist. She can sing, she can write like no one else, and any time I need her she is always there for me. We have kept working together, and I love the combination. I think what is interesting in music is to combine opposite feelings together into one song. What is interesting to me is to have a dark instrumental with a happy melody, or the other way around. I’m a happy person, so I like to make emotional records that put you in a good mood. Like, I produced I Gotta Feeling (the 2009 hit single from The Black Eyed Peas’ 5th studio album, The E.N.D.). Those are the kinds of records I make. And Sia, she is a moody, melancholy, survival kind of artist. The combination between the two is awesome. That is why me and Sia work so well together.

Beverly Hills Magazine: You like the contrast of blending dark and light feelings into your musical collaborations.

When you study music theory and different types of melody and core percussion, they teach you that people want to have seventy-five percent of an experience of hearing something that is familiar to them, and twenty-five percent maximum of feeling excited by hearing something new. This is really a precise number. It’s interesting, when you listen to certain core percussions you need the last chord to feel good, and it’s the same when you go back to the first chord. In between the first and the last chords, you can afford to be more experimental. But if you were to add one chord after the other in a sequence that no one ever heard before, it’s very rare that it would work. People need a little bit of excitement and they need their familiarity. 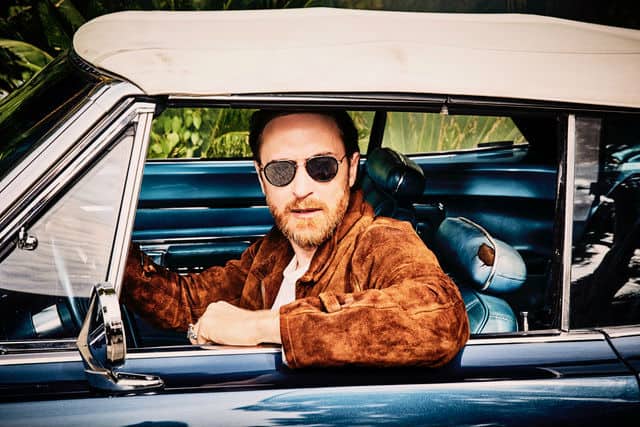 Beverly Hills Magazine: What spiritual philosophy do you subscribe to? And how does it impact your work?

David Guetta: I’m a very happy person, and I’m trying to share this with the world. I’m trying to share my passion for music with the world, and I’m trying to bring people together. I think there are two things that bring people together, and that is sports and music. At a Football match you may have the president of the country, and you have working people; people from all walks of life. That is what I am trying to do with music. That’s what has been my mission my entire life. I’m coming from an underground scene, but I always wanted my music to cross over, because I’m not a guy who’s trying to keep it for myself. I like sharing. When I was trying to bring urban music and electronic music together, people’s feeling was that if you’re black you’re going to be into urban music, and if you’re white you’re going to be into electronic music. But why? To me, we are all the same, so we can also create music that speaks to everyone.

Beverly Hills Magazine: I read that your father was a Sociologist. Did his studies and his work have any impact on your life philosophy, or anything about how you choose to live your life?

David Guetta: It’s funny, because my parents were very, very left. And because it was the 1960s, they were hippies. Of course, being a hippy at that time was very common. I was raised like this. So, for me, being rebellious was saying, “I want to be an entrepreneur and I want to make money. I don’t want to be like you guys.” (Laughs) I was also super pro-America, and I was only watching American movies and listening to American music.

Beverly Hills Magazine: What about things like picking up your father’s philosophies on any social causes, or on human behavior; things like that?

David Guetta: You know, I really hadn’t thought about it. Now that you mention it, I would say a lot of the advice I was given stuck with me. Things like believing and treating everyone as equal, and just a certain way of navigating the world, without me even realizing it.

Beverly Hills Magazine: What is the difference, culturally, between how your music is received in Europe versus in the states?

David Guetta: It’s extremely different. There was this pivotal moment in my career where I brought people together and opened doors for this kind of music in the U.S., with songs like I Gotta Feeling (with the Black Eyed Peas), Club Can’t Handle Me (with Flo Rida) and music like that. It was a special moment of pop music that transcended genre, around 2009, 2010 and 2011. Now, in the U.S., it’s mainly hip hop. Among the biggest deejays in Europe, I am probably the one that is in the middle, culture-wise. The bigger deejays in Europe could probably not be as successful in the U.S. In Europe, if you want to be cool and different, you would likely be into underground dance music.

David Guetta’s seventh studio album, 7, is out September 14th. Pre-order at iTunes and at Pre-Order from these online stores now. Follow on Twitter @davidguetta.

Allison Kugel
View More Posts
Allison Kugel is a syndicated entertainment columnist, and author of the book, Journaling Fame: A memoir of a life unhinged and on the record. Follow her on Instagram @theallisonkugel and at AllisonKugel.com.