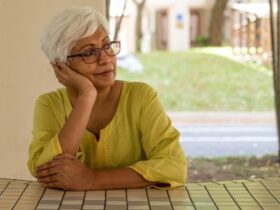 The Myths of Aging That People Misunderstand

The high number of cesarean sections in the U.S. might make you think that there’s a high prevalence of babies who get stuck during the birthing process. While it doesn’t happen often, it does happen, and being prepared can help relieve some of your stress during birth. (Image Credit: Amit Gaur/Unsplash)

Advances in medical science have made giving birth safer than in the past — for both the mother and the child. Even though it is rare that babies get stuck during birth, that doesn’t mean it doesn’t happen at all. If it does happen, serious damage can occur. The following are some reasons why a baby could get stuck during labor:

As your pregnancy is nearing the end, your baby is supposed to position itself so it can travel down the birth canal. Typically, this means that their head is down, their backs are facing toward your front, and their chin is tucked into their chest.

If your baby isn’t in the right position, such as if they are breech, this could increase the chances of them getting stuck during birth.

Certain birthing positions can make it easier to give birth. Even if your baby has positioned itself correctly, your position can have an impact on whether or not the baby gets stuck.

Many hospitals require you to be flat on your back with your feet in stirrups to deliver your baby, as this makes it easier for the medical professionals to see what’s going on. This restricts your ability to work with your body and the baby to have the birthing process go as quickly as possible.

The Size of Your Baby

One of the most common issues that result in your baby getting stuck during birth is the size of their shoulders, which can result in shoulder dystocia. This is when the baby’s shoulders get stuck in your pelvis.

Another concern that medical professionals might have is the size of your baby’s head. If it’s too large, it will be impossible for the baby to travel through the birth canal, which can cause them to get stuck.

What Happens if the Baby Gets Stuck?

A baby getting stuck during the birthing process is one of many scenarios expectant mothers fear. Again, take heart in knowing that it’s not very common. However, if it does occur, some of the issues that might arise are that your baby won’t get enough oxygen. This could result in brain damage, organ failure, or even death.

Your doctor will do everything they can to ensure that your child is born as quickly as possible. If they get stuck in the birth canal, they may use forceps to help get them out. While this helps with the process, it can also lead to injuries, including skull fractures, bleeding inside the baby’s skull, or swelling, among others. This could lead to cerebral palsy and other conditions.

With the use of forceps, the mother might also experience physical injury, including third- or fourth-degree tears. Should your baby be in serious distress and the doctor is sure they won’t be able to come through the birth canal, then they will perform a cesarean. Close monitoring by a doctor during pregnancy, labor, and birth is the best strategy in preventing birth injury for you and your baby.

Families affected by birth injury can speak to a lawyer about claiming compensation. While it won’t change what happened, it could ensure that you aren’t paying for medical bills that have piled-up due to circumstances or injuries beyond your control.

Preparing for the Worst

Even though babies getting stuck during the birthing process might be rare, it’s still something that could happen. Talk to your doctor about the plan if this becomes a reality. This can help put your mind at ease and help you prepare for the worst while expecting the best.