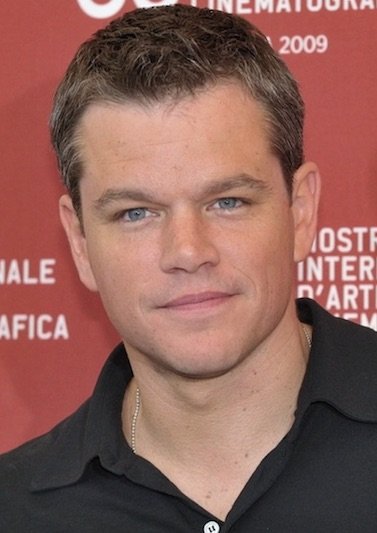 Matt Damon is a Hollywood mainstay and one of the highest-grossing actors of all time. His acting ability and penchant for philanthropy make this family man a favorite with industry insiders as well as audiences. Today, we focus our Hollywood Spotlight in his direction. (Image credit: WikiCommons/Nicolas Genin)

1997 saw the premiere of Good Will Hunting in which Matt Damon played the titular character, a somewhat-broken genius working as a janitor. Coupled with the powerful acting and emotions brought to his character and stellar performances by co-stars Robin Williams, Ben Affleck and Minnie Driver, the moving movie was quite the success. Named his breakout performance, Matt Damon garnered much praise. In fact, he earned a Best Actor Oscar nod for his role.

But even more notable than his outstanding performance was that he and Affleck had written the screenplay based upon a project Matt Damon began as a Harvard student. What a first go! Critics and audiences alike enjoyed the depth of writing. Moreover, their exploration of the nuances that exist between the Catholic and Protestant communities in Boston has even been academically studied. As such, the pair deservedly won the Academy Award for Best Original Screenplay as well as the Golden Globe in the same category.

The film’s success continues today with it still ranking on numerous top 100 favorite movies lists. While Good Will Hunting was not his first film that earned him acting props, it certainly solidified the idea that audiences could expect great things from the fledgling star.

In 2001, Matt Damon joined an ensemble cast of Hollywood heavy-hitters led by George Clooney and Brad Pitt. A remake of the Rat Pack’s original 1960’s flick, Ocean’s Eleven was a fun movie that delighted audiences, not only with its lighthearted capers but for its all-star cast. Aside from Matt Damon, Clooney and Pitt, Julia Roberts, Andy Garcia and Don Cheadle, amongst many others, created the memorable ensemble. Matt Damon’s portrayal of Linus Caldwell, a talented pickpocket, surely contributed to the film’s success. However, audiences were nearly deprived of the star as Johnny Depp and Mark Wahlberg were originally considered for the role!

2002 saw yet another side of this talented star. The Bourne Identity focused on an amnesiac CIA assassin and his struggles to uncover his identity. A Hollywood adaptation of the Robert Ludlum book series, the movie was a fantastic success. Moreover, seeing Matt Damon as an action star was a new experience for audiences. In fact, Brad Pitt and Russell Crowe were both originally considered for the role. However, Matt Damon hit Jason Bourne out of the park! Studying stunt work, weaponry, boxing and martial arts allowed him perform most of his own stunts rather than relying upon the magic of film.

The movie was a tremendous success that paved the way for four other movies to follow: The Bourne Supremacy (2004), The Bourne Ultimatum (2007), The Bourne Legacy (2014) and Jason Bourne (2016). Matt Damon played the titular character in all installments with the exception of The Bourne Legacy which instead starred Jeremy Renner as lead Aaron Cross. Each movie has been a financial success as audiences enjoy the fast-paced action of the spy thrillers.

Fans were surprised with the lack of Matt Damon’s involvement in the fourth movie especially with The Bourne Ultimatum becoming one of the highest-grossing films of the year. However, most were pleased with his return for the fifth installment. Best yet, late last year, the powers-that-be announced that yet another Jason Bourne movie is in the development.

An A-list cameo never fails to bring joy to audiences. After all, there is nothing better than a favorite celebrity dropping into just one scene and stealing the show! Some actors have developed a reputation for taking these small roles. Matt Damon is one such star. From appearing in the George Clooney-directed Confessions of a Dangerous Mind (2002) to making us laugh with his rendition of Loki in Thor: Ragnarok (2017), it seems a little Matt Damon goes a long way.

Indeed, the celebrity has a sense of humor with these performances. In 2018’s Deadpool 2, Matt Damon cameoed as a beer-bellied man in a scene with Cable, the movie’s villain played by Josh Brolin. Nearly unrecognizable in the role of Redneck #2, Matt Damon’s performance was uncredited. Credit did go, however, to Dickie Greenleaf, a nod to Matt Damon’s character’s assumed persona in The Talented Mr. Ripley (1999).

The star even filmed a cameo for the newest incarnation of the Ocean’s films, Ocean’s 8 (2018). Unfortunately, the footage was left on the editing room floor.

Matt Damon has always displayed his passion for ending world poverty. In his quest to do so, he has created and worked with a number of nonprofits. Most notable is his development and ongoing involvement with Water.org. This organization seeks to provide global access to clean water and sanitation. Over the years, the celebrity has become incredibly knowledgeable about the matter. In fact, leading world groups, including the World Bank and the World Economic Forum, consider Matt Damon to be an expert in clean water and sanitation!

In addition, Matt Damon worked with his Ocean’s Trilogy co-stars to create a global human rights charitable organization. Originally called Not On Our Watch, today the nonprofit is known as The Sentry. Not only a co-founder, this giving celebrity continues to aid the mission by serving as a board member.

And like many of his fellow Hollywood celebrities, Matt Damon also works with Feeding America Entertainment Council. To support their mission, he has appeared in a number of public service announcements.

Matt Damon has two projects that audiences can enjoy this year. First up is Stillwater. In this crime drama, the star plays a man seeking to exonerate his daughter, played by Abigail Breslin, who has been accused of murder. The movie is scheduled for a November 6, 2020 release date.

The star’s second movie for the year is The Last Duel with a Christmas 2020 release date. The Ridley Scott-directed historical thriller tells the story of best friends who must fight to the death in 14th century France. Adam Driver and Jodie Comer co-star. Moreover, the movie reunites friends Matt Damon and Ben Affleck with the dynamic duo writing and appearing in the film. With hope, history will repeat itself with another must-see movie!