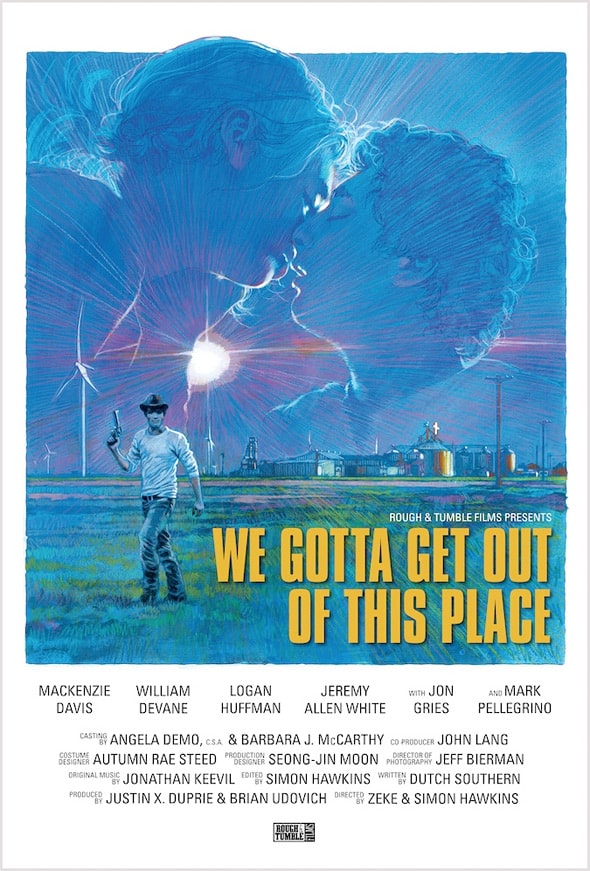 ‘We Gotta Get Out Of This Place’ Movie

Brothers Zeke and Simon Hawkins’ highly acclaimed feature directorial debut WE GOTTA GET OUT OF THIS PLACE will screen for buyers at the upcoming American Film Market following a deal with Lightning Entertainment for international sales representation. On the heels of outstanding reviews and critical acclaim following the film’s festival screenings at TIFF and Austin’s Fantastic Fest, the Los Angeles-based company moved rapidly to close a deal with the producers’ sales rep. Submarine Entertainment for all rights ex-USA.

A hard-boiled pulp thriller set in South Texas cotton country, from screenwriter Dutch Southern, the story has drawn favorable comparisons to the gritty crime stories of Jim Thompson.  And the Hawkins Brothers have elicited high praise for the performances, atmosphere, tension, mood, and style created under their direction.

Ain’t It Cool News wrote that WE GOTTA GET OUT OF THIS PLACE movie, “Hearkens back to the days when the Coen Brothers, Quentin Tarantino, and Robert Rodriguez could get first films made and seen out of pure awesomeness.” Hitfix called the film, “Criminally good.” And Indiewire commented that the film is, “Enhanced by a humanity these stories almost never have.”

The movie stars Jeremy Allen White (“Shameless,” “Twelve”) as Bobby, Logan Huffman (“V,” “Lymelife”) as B.J., and Mackenzie Davis (“The F Word,” “That Awkward Moment”) as Sue. The three best friends are forced to pull off a robbery for local cotton farmer and resident sociopath, Mark Pellegrino (“Lost,” “The Big Lebowski”) as Giff.  What they don’t know is that the targeted money belongs to local gangster Big Red (William Devane). In this gritty coming-of-age crime thriller, actions have consequences, some good, and others not.

WE GOTTA GET OUT OF THIS PLACE is produced by Rough and Tumble Films’ Justin Duprie and Brian Udovich (“All the Boys Love Mandy Lane,” “The Wackness”).    Submarine’s Josh Braun negotiated the deal with Lightning acquisition and sales consultant Richard S. Guardian and Lightning’s EVP & General Manager Ken DuBow.   Guardian and DuBow screened the movie at TIFF and commented, “The film is a total sleeper…the craftsmanship and power of it just blows us away.  We find it hard to believe that this is a first feature. We’re proud to be introducing to Lightning’s clients the first film from two brothers whose names we are all going to be hearing quite often in the future!”   And Zeke Hawkins later said, “The passion that the Lightning team have for our film is a great comfort, knowing that our first feature has been embraced by such caring partners.”

Lightning will screen WE GOTTA GET OUT OF THIS PLACE during the AFM and commence sales during the market.