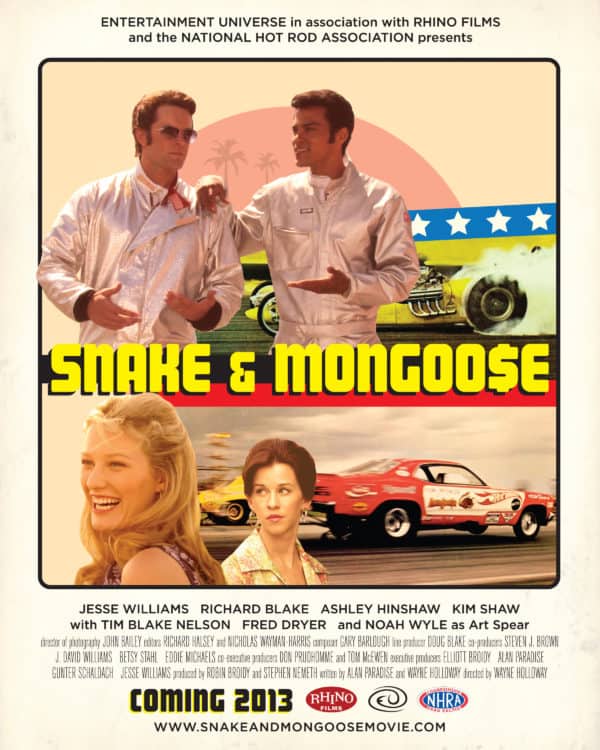 American Cinema International partners with Entertainment Universe and acquires Snake and Mongoose, the true life story of the biggest racing rivalry and will screen the film at American Film Market 2013.

What: Exclusive screenings of Snake and Mongoose (genre: action-adventure)

When & Where: Screenings will take place at the 2013 American Film Market (AFM):

The family-oriented action-adventure film has already opened in 25 cities in the U.S. since August of this year and will debut for international buyers at AFM next week. The audience will also have a chance to see authentic restored racing footage from the actual races in the film.

“We’re excited to be participating in AFM again this year which enables us to reach a global audience for our distribution projects,” says ACI President Chevonne O’Shaughnessey. “Our latest acquisition of Snake and Mongoose is in line with one of the genres we have been closely focused on. The film has received numerous rave reviews and both racing and non-racing fans, men and women, young and old all love the film so we are excited to see how the international audience will receive it.”

ACI recently entered into an agreement with Entertainment Universe which produced Snake and Mongoose to represent them as their sales agent in the international marketplace.

“We’re thrilled to be partnering with ACI. George Shamieh and Chevonne O’Shaughnessy have years of international sales experience, are extremely well-respected and are particularly adept with films centered around racing,” says Robin Broidy, producer at Entertainment Universe.

For more on Snake and Mongoose or to view the trailer, please visit:

American Cinema International (ACI) is an independent entertainment company that creates, produces and distributes filmed entertainment throughout the world. Although the company itself was established in 2000, it is worth noting that the staff has many years of industry expertise. George Shamieh, formerly a principal at PM Entertainment is a veteran sales agent and producer with 20 years of experience and over 150 film titles to his credit. Chevonne O’Shaughnessy worked with Schamieh at PM Entertainment as the Head of International Sales for 15 years. Together they bring their expertise to ACI. For more information on American Cinema International, please visit http://aci-americancinema.com/

Robin Broidy formed Entertainment Universe in 2011 to develop, produce, and finance motion pictures and television programming. The company developed 2012 action/thriller “Mayhem” among several other feature projects. Broidy is a longtime entertainment industry attorney and businesswoman who has held positions such as Senior Vice President of International Home Video and Vice President, Business and Legal Affairs/Acquisitions for Twentieth Century Fox.

Rhino Films is an independent film company that originated as a division of the iconoclastic record label, Rhino Records. The company was founded and is headed by producer Stephen Nemeth, who has produced more than 20 films, 2012 Sundance Audience Award-winning “The Surrogate,” starring Academy Award winner Helen Hunt and Academy Award nominee John Hawkes, “Fear and Loathing in Las Vegas,” “Why Do Fools Fall in Love,” “Dogtown and Z Boys,” “What We Do Is Secret,” “Radio Free Albemuth,” and “You And I.” Nemeth also has extensive experience producing documentaries, including the Academy Award-nominated “War/Dance” and “Fuel,” which won the Audience Award at the 2008 Sundance Film Festival, among others.