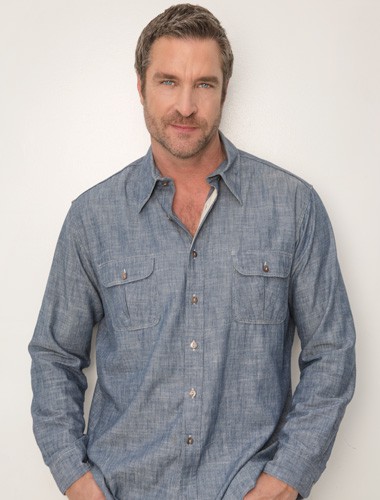 Born in Tulsa, Oklahoma, Ben Reed grew up living in a small farming community before attending West Virginia University where he was the starting quarterback during his junior year. Acting was never in his plan until a spring break trip to Miami his senior year of college when he saw an audition notice that would change his life forever. Since he got his career start with a small role in “Babe” he has starred in some of the biggest television shows including “CSI,” “House,” “NCIS,” “Reba,” “The X-Files,” “Will & Grace” and “The Young and the Restless,” just to name a few. (Image credit: Bobby Quillard)

Now Ben Reed stars in Warner Bros’ highly-anticipated thriller, AMERICAN SNIPER, alongside Bradley Cooper and directed by Clint Eastwood premiering in theaters across the country on Friday, January 16th. In the true story of Navy S.E.A.L. Chris Kyle (played by Bradley Cooper), Chris Kyle experiences flashbacks of him with his father (played by Ben Reed) which prove to be monumental moments from his youth.  As Cooper recounts the Navy S.E.A.L hero’s amazing and gruesome military career throughout AMERICAN SNIPER, these vivid memories of father and son give the audience a glimpse of the values and discipline which inevitably shape Chris Kyle into the man that he has become. Reed drew inspiration for the role from his brother who in real life is an esteemed member of the Army Special Forces. We learned more about this Hollywood Star in our exclusive interview.

Ben Reed: It’s always been something I wanted to do. During my school days I was into typical guy stuff; baseball, football, basketball and one summer I saw an ad in a newspaper for an audition for the American Academy of Dramatic Arts. I didn’t tell anyone I was auditioning and I went. A month later I got a call back, and was accepted into their summer program. I packed my car and hit the road to Los Angeles. My Dad thought I was crazy but for the first time in my life I was doing what I really wanted to do, and I loved it.

Ben Reed: I love to read the script multiple times. The script itself provides a history and back story, but I really enjoy creating my own personal history for the characters I play. I don’t draw or paint but as an artist I get to build and create a fantasy world for the characters I become. I can make it everything I want it to be, and this is one of the biggest reasons why I love acting. It’s all fantasy.

Beverly Hills Magazine: You recently executive produced a film called STARCROSSED, what inspired you to get into producing as well?

Ben Reed: The first time writer/director on STARCROSSED, Mr. Chase Mohseni, who is a friend of my son, and he came to me with the script and asked me to read it. I did and was really impressed. He made a few tweaks and then I felt it was great and deserved production. I agreed to produce it and I had the most fun I’ve had in the last twenty years of my life. I get to work with exceptionally talent artist like Mischa Barton, Grant Harvey, Eric Roberts and others. The whole process from start to finish gives me an amazing sense of personal achievement.

Ben Reed: I love the opportunities that Hollywood gives to people; actors and producers. If you’re passionate about being an actor or being in movies or television, and you have the strength and tenacity to put up with “No’s” and “Not today’s”- Then this is the town for you. If you’re weak, then this town can beat you up.

Beverly Hills Magazine: What’s your favorite part of the business?

Ben Reed: I really enjoy the whole process, from receiving a script, the auditions where I get to do my song and dance, to actual production and finally on screen. It’s my competitive nature in me that enjoys auditioning because when I get the part I see it as winning. The rest is such a creative process that I really love.

Beverly Hills Magazine: What’s the worst part of the business?

Ben Reed: When there are projects or roles that you know you would be amazing for, but you just don’t get the part or the opportunity to audition. Sometimes when you do get the opportunity and you completely blow it because of a bad audition. That’s the worst part….Missed opportunities.

Ben Reed: All you can do as an actor is put your work out there and hopefully you will win. If it’s your passion, and you absolutely have to do this, then be prepared to get rejection after rejection. You have to keep coming back and giving your all. You don’t want to have any regrets in life. If you’re going to pursue this, you can’t have fear. Fear is the killer. You must follow your dream. After all, that is what life is all about.

With an attitude of gratitude Ben Reed has earned his way to the top and is one of our new rising Hollywood Stars. With down to earth mid-west charm, commitment to hard work and handsome good looks, we are certain Ben is on his way to much deserved success as a talented actor and a visionary producer.