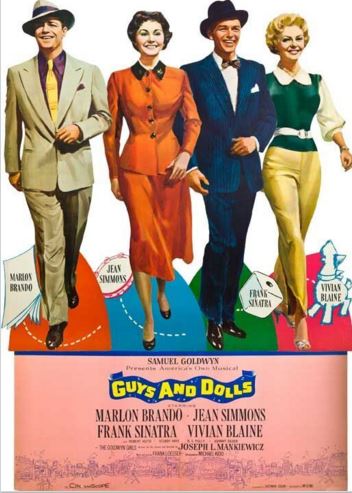 The Art Directors Guild (ADG) Film Society and American Cinematheque kick off the 2016 ADG Film Society Series with a special program OLIVER SMITH: THE HOLLYWOOD MUSICAL BY DESIGN /GUYS AND DOLLS (1955) showcasing Oscar®-nominated Production Designer Oliver Smith, on Sunday, April 17, at 5:30 PM at the Aero Theatre (1328 Montana Avenue, Santa Monica). The program, which includes selections from Oliver’s films The Band Wagon (1953), Oklahoma (1955) and Porgy and Bess (1959) will be moderated by ADG Film Society co-chair and Emmy®-winning Production Designer John Iacovelli (Peter Pan), himself a student of Smith. This will be the season’s first program of the 2016 ADG Film Series entitled “PRODUCTION DESIGN: LOOKING AT NOTHING, SEEING EVERYTHING,” sponsored by The Hollywood Reporter.

Oliver Smith was one of the most prolific and imaginative designers in the history of American theater. His designs include screen adaptations of The Sound of Music (1965) and The Unsinkable Molly Brown (1964) in addition to such Broadway hits as Brigadoon, West Side Story, My Fair Lady, Camelot and Hello, Dolly! He was nominated for 25 Tony Awards and won 10.

Smith was also nominated for an Academy Award in Art Direction-Set Decoration for Guys and Dolls, starring Marlon Brando, Jean Simmons and Frank Sinatra. The musical takes place in New York when a gambler is challenged to take a cold female missionary to Havana, but they fall for each other, and the bet has a hidden motive to finance a crap game.

“The Art Directors Guild Film Society is honored to host an exceptional panel of artists, all who were students of Production Designer Oliver Smith, to discuss his legacy and his unique talents that perfected American musicals,” said Iacovelli. Joining him for the post-show discussion will be Production Designers JEFFREY BEECROFT (Dances with Wolves, Transformers: Age of Extinction),HOWARD CUMMINGS (The Knick, The Usual Suspects, Behind the Candelabra), MAYNE BERKE (The Princess Diaries, S.W.A.T.) and KALINA IVANOV (Little Miss Sunshine, Grey Gardens, Smash, Poltergeist).

The Art Directors Guild Film Society 2016 Series includes:
• Sunday, May 22 – THE BELOVED ROGUE (1927) Silent Movie at the Egyptian Theatre in a Tribute to William Cameron Menzies, the First Production Designer and a Conversation with Biographer James Curtis
• Sunday, June 26 – ON THE WATERFRONT (1954) – DESIGNERS ON DESIGN at the Aero Theatre, A Conversation with Production Designer Wynn Thomas and A Tribute to Art Director Richard Day
• Sunday, July 31 – HAROLD AND LILLIAN: A HOLLYWOOD LOVE STORY – The Hollywood Premiere at the Egyptian Theatre Spotlighting Harold and Lillian Michelson with Director Daniel Raim and Lillian Michelson.

ABOUT THE ART DIRECTORS GUILD:
The Art Directors Guild (IATSE Local 800) represents 2,300 members who work throughout the United States, Canada and the rest of the world in film, television and theater as Production Designers, Art Directors, Assistant Art Directors; Scenic, Title and Graphic Artists; Illustrators and Matte Artists; Set Designers and Model Makers; and Previs Artists. Established in 1937, the ADG’s ongoing activities include a Film Society, an annual Awards Banquet, a creative/technology community (5D: The Future of Immersive Design), a bimonthly craft magazine (Perspective); and extensive technology-training programs, figure drawing and other creative workshops and year-round Gallery 800 art exhibitions.  Connect with the Art Directors Guild on Facebook, Twitter and Instagram.