Today, we shine our Celebrity Spotlight on the effervescent Selena Gomez. This bright and smiling celebrity made her television debut on Barney & Friends. She played Gianna for two seasons of the cult kid hit. The future star ended her run with the purple dinosaur as producers thought she was too old to continue her character. But that was just the beginnings of celebrity for the soon-to-be famous Selena Gomez. (Image Credit: BILLBOARD)

Following Barney & Friends, Selena Gomez starred as Alex Russo on Disney’s Wizards of Waverly Place. The successful teen fantasy ran for 5 seasons, 2007 to 2012. The show and its stars received nominations for and won many awards, both in Hollywood and worldwide. 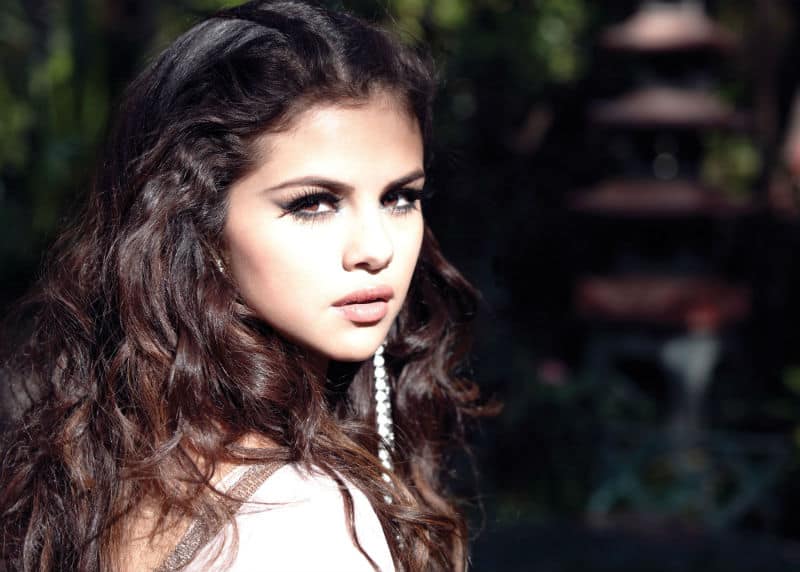 Before striking out with a solo career, Selena Gomez was the front person for Selena Gomez & the Scene. The group was together for five years and put out three albums: Kiss & Tell (2009), A Year Without Rain (2010), and When the Sun Goes Down (2011). Each album debuted in the top ten on the U.S. Billboard 200. The group disbanded in 2013, with Selena Gomez focusing on her solo music and acting career.

Selena Gomez’s first album, Stars Dance (2013), received mixed critical reviews. However, her 2015 album, Revival, had a different reception. Audience and critics alike loved her new sound. Three songs from Revival dominated the charts. In fact, she became one of only six women to have three songs from the same album hit the top of the charts.

Hollywood accolades and other awards

In addition to many award nominations, Selena Gomez has an American Music award, 16 Teen Choice Awards, and 2 Billboard Women in Music Awards. But interestingly, she also hold 10 Guinness World Records. Most of these world records connect to her kid’s choice awards. However, four of these world records are due to her Instagram stardom. With over 141 million followers, Selena Gomez is the most followed instagram user.

This multi-talented star also dabbles in executive producing. She played a large role in bringing 13 Reasons Why to Netflix viewers. The highly controversial yet poignant show was an instant hit with viewers. While the subject material is quite dark, Selena Gomez, among others connected to the show, are hopeful 13 Reasons Why will provide opportunities for meaningful discussion on bullying, sexual assault, self-harm, and suicide.

Selena Gomez has been quite forthcoming about her struggles with lupus. This chronic and incurable autoimmune disease causes the immune system to attack the body’s healthy tissue. In 2015, this strong celebrity learned she had lupus. Her struggle with the disease caused anxiety and depression, not to mention the physical debilitation. In fact, due to damage from the devastating disease, the star needed a kidney transplant in 2017. Since receiving a new kidney from friend Francia Raisa, this amazing celebrity has been feeling hale and hearty.

Since the beginning of her Hollywood career, Selena Gomez had involvement with many charitable organizations. From 2008 to 2010, she served as the UNICEF spokesperson for their Halloween fundraising endeavors. She participated in UR Vote Counts. This organization sought to educate America’s youth on the 2008 presidential candidates and the importance of voting. Also, she partnered with some of her fellow Disney alumni, such as Demi Lovato and Miley Cyrus, for Disney Friends for Change, a campaign to benefit environmental causes. Like many of her fellow celebrities, Selena Gomez also participates with the Make-A-Wish Foundation. Indeed, she grants so many wishes that the Foundation honored her with an award!

Selena Gomez has even found ways to turn a negative into a positive. Last fall, she filmed the movie, A Rainy Day in New York, with Timothée Chalamet, Elle Fanning, Jude Law, and Liev Schreiber. The film had a 2018 release. Unfortunately, Woody Allen wrote and directed the romantic comedy. After filming was complete, spurred on by the success of the Me Too movement, some of the involved stars indicated their regret in working with Allen, who was accused of sexual assault in the past. In response, Selena Gomez donated over $1 million, more than her salary for the movie, to Time’s Up.

Selena Gomez’s health has precluded her from being extremely prolific since Revival. However, she is a member of the all-star cast lending their voices to the upcoming film, The Voyage of Doctor Dolittle. The family film, featuring Robert Downey Jr., is due to hit theaters on April 12, 2019. Also, word is out that the famous singer is working on a new album. The release date is unknown. But we are very excited to hear that it is in the works. We wish Selena Gomez the best of luck and health.