Owning a yacht is a big deal. It’s a sign of success or accomplishment. But owning Thunder 164 feet Oceanfast is much different; it’s one of those rare opportunities given to the select few, Thunder is not any other mega yacht, its exceptional and one of a kind.

Since the conception designing stages, its destiny was to be a leader in the yachting world. Jon Bannenberg and naval architecture, Mark Ellis Marine, were the designers behind this magnificent superyacht. Their prowess is the reason. Thunder stands out as the ultimate mega yacht until today.

The official launch dates back to 1998, but in 2016, it underwent an extensive refit. Some of the changes included new interior walls, ceilings, furniture, and the entire floor. What followed, was the introduction of Italian flair with non-other than Cavalli. He fitted the new interior with his Visionaire furniture and furnishings, and all the redone took place at Lusben Shipyard in Viareggio, Italy. 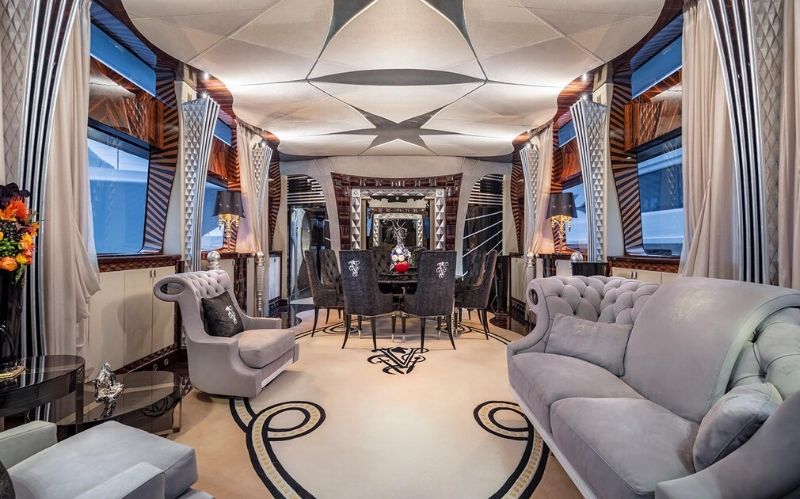 The Inside of the Mega Yacht

Like mentioned before, the yacht is spacious and has plenty of entertaining spaces, and other abound areas. One of them being the mid-ship master suite, four staterooms at the lower deck, plus convertible den hosted on the main deck. Additionally, all the rooms are ensuite with bathrooms and enough for 12.

The master suite features a king-size bed, exquisite furnishing of Visionaire designs, which includes the fitting inside the yacht. Besides, the suite has an extensive double wardrobe covered with a mirror.

Apart from the master ensuite, which has a 50″ Smart LG TV, all the other suites have a 32″ Smart Tv. Above all, they are all connected to SAT-TV and the internet. Plus, the whole yacht is a WIFI hotspot, which gives everyone internet access.

Thunder has an exterior space to spice your yachting experience. From the lower aft swim deck to the seven-meter fore-deck pool, plus other stunning areas on the flybridge. Also, you have the dinning saloon that’s perfect for intimate dinners. But the main salon is where entertainment is, where the furniture and furnishing are distinct and comfortable.

Thunder’s rear side offers a dramatic look, which includes sweeping lines, dual staircases, and an enormous swim deck. Then, it ushers you to the aft indoor-outdoor dining saloon. Here, the panorama view adds splendour to your yacht life. 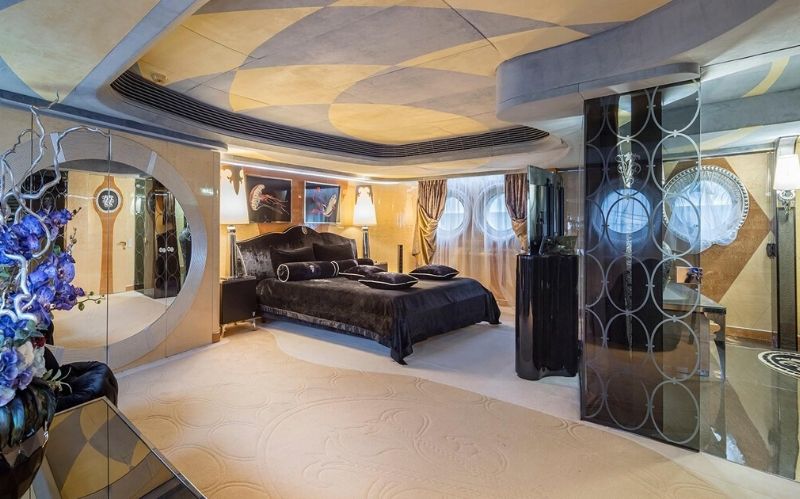 Power Behind the Engine

This mega luxury yacht runs on two engines, MTU 396 series V16 TE 94, with each having a displacement of 2,950 hp while it uses the reintjes VLJ930 gearbox and KAMEWA jets for propulsion.

Overly, the engine output of Thunder is exponential. It has the power to cruise at a maximum speed of 34 kn, while its normal cruising speed range around 19 kn.

For yachting enthusiasts looking forward to those rare sea moments, Thunder 164 is the mega yacht that ticks all the yacht life expectations. It’s selling price is about $ 6,495,000.

Thunder is the ultimate mega yacht for all you cruising fantasies. It has shallow drafts, its spacious, stylish, and faster compared to other superyachts.

Thunder belongs to a class of her own. Again, it possesses a special kind of yachting aggression. Therefore, the yacht is an entertaining match for anyone who loves the spectacular life of the ocean. 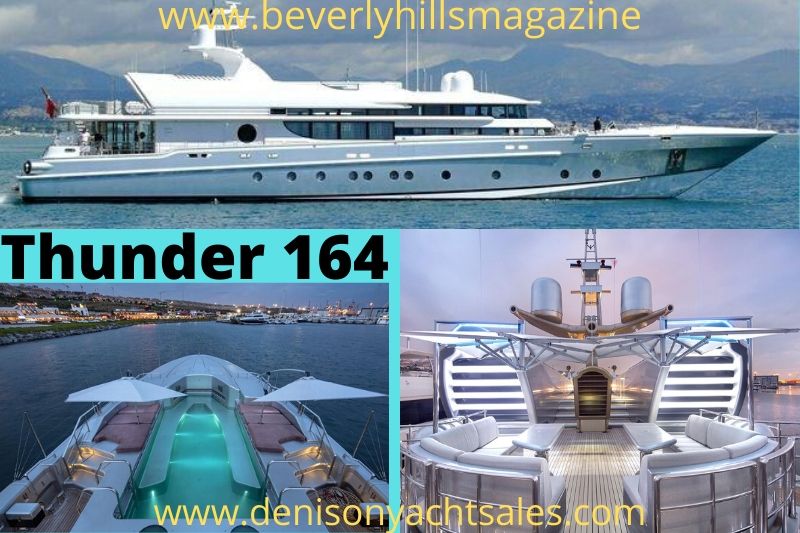